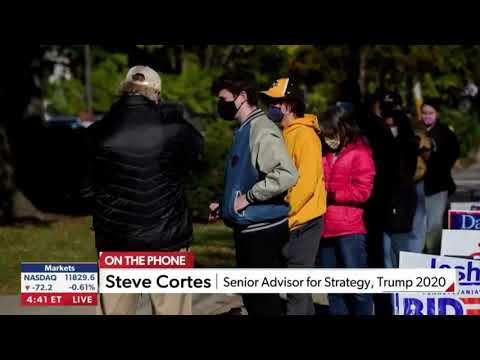 I’m thinking this will all come down to the various state legislatures. I think the court efforts should proceed, if for nothing else to expose evidence to the public if allegations are true about 1) gross ballot dumpings of 1000s of votes in the middle of the night and/or 2) computer programmed machine totals that are far off from audited physical ballot totals.

If, IF, a large amount of such evidence suggests, but even doesn’t PROVE in such a short period of 2-3 weeks, it still falls back to the state legislatures, very specifically, under the U.S. Constitution. The Constitution does NOT specify HOW the state legislatures CHOOSE their electors. Theoretically, and in normal, non-fraudulent times, they would obligingly choose electors to reflect their state’s popular votes for president.

But, what if in, say PA, or MI, or GA (remember, the following states ALL have BOTH upper and lower state houses, that is their legislatures, controlled by Republicans: AZ, GA, MI, PA, WI), that they seriously consider that the voting counts as reported to them are fraudulent. And also, remember, that they have ABSOLUTE Constitutional authority with NO input or consideration by governors or state courts.

They could either: 1) accept what they think are fraudulent numbers and appoint Biden electors, 2) they could refuse to appoint ANY electors before the Constitutional deadline of, I think, Dec 13, to report that to the Congress, or they could 3) appoint Trump electors and report those to the Congress.

But that’s not the case. The case is clear, this is in the hands of the Republican legislatures of AZ, GA, MI, PA, and WI. In fact, they could all meet right now and appoint Trump electors, in accordance with the powers granted specifically in the Constitution.