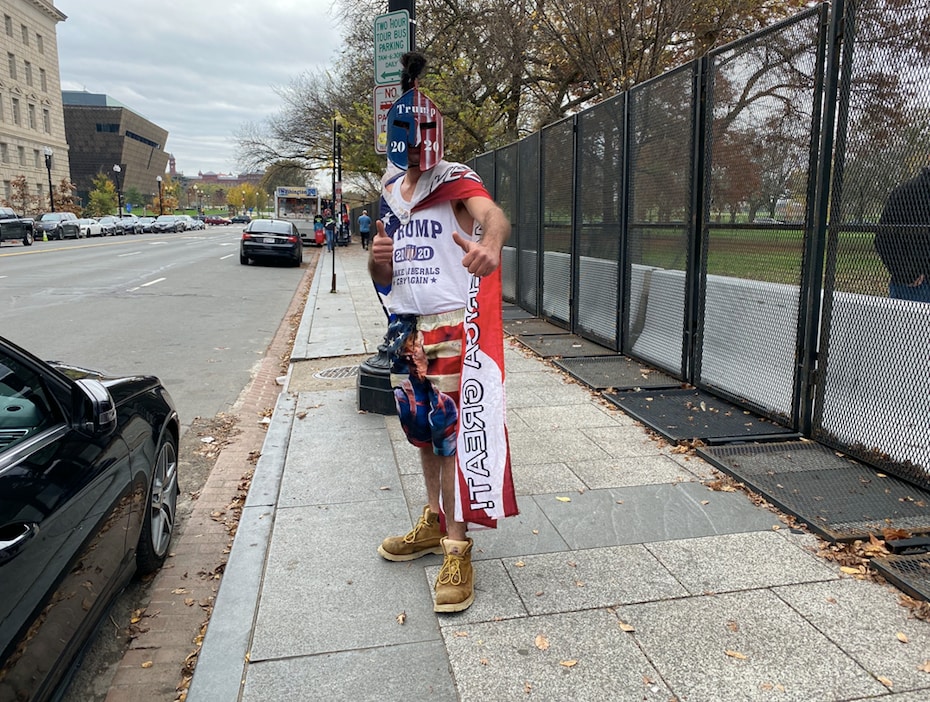 Washington, DC — The aftermath from the 2020 election protests is apparent along the boarded storefronts that line the streets and avenues of the nation’s capital. Even as one man named Ricardo begins to take down the wood off the windows walling the expansive, grandiose Pennsylvania Avenue on Friday morning, the protests are far from over. This weekend, supporters of President Donald Trump are congregating in the city for a march to express their anger at an election that they believe is being stolen from them.

Right across the street from the towering Trump International Hotel, the second-tallest building in the city, Ricardo removes, stacks, and then places the boards into his minivan parked on the red-brick sidewalk beside a building. Perched at the end of the avenue on top of its hill, the Capitol dome gazes down at the bustling traffic. “I just started this morning,” he said about taking the boards down.

In addition to this building, Ricardo was also hired to put up the boards at three other buildings in the lead-up to what was expected—and has been—a contentious post-Election Day period.

“I do four places,” he said. The other buildings, he added, were around 17th Street NW.

He thinks that politically motivated violence, the anticipation of which motivated businesses to board their fronts in the first place, has come and gone. “I just think it was about the election, like who’s gonna win and all that,” Ricardo said.

This reporter and Jennie Taer had the opportunity to speak to some of the people who’ve flocked here for the march—and to some Trump supporters who just so happened to pick this weekend to vacation in Washington.

One man named Tom brought his 15-year-old daughter Mackenzie down to DC from their home in Philadelphia to tour the city and see the historical sites and museums together. They’ve had this father-daughter trip planned since September. Both feel that the allegations of election misconduct and voter fraud that the president and Republicans are making should be investigated, but they’d accept the results if the legal challenges don’t unearth anything major and still uphold Joe Biden’s victory.

“There’s enough instances of things being said that raises questions of things and I’d like the truth to come out so that this way we can actually get to the bottom of it,” Tom said. “If Biden wins and it’s all legitimate at that point, great, I’ll accept it.”

When asked if they will end up attending the march, Tom said that they might try to walk past it and catch a glimpse.

One person who came to the capital for the march, Robert from Florida, was all decked out from head to toe in Trump gear. The wilder parts of his outfit included an American flag for a cape, swim trunks with a picture of Trump’s head on Captain America’s torso, and even a Spartan-looking helmet. “Trump Army, baby,” he said when inquired about his getup.

Robert said that he and a friend of his came down to DC to “stop the steal” and to “show the president that the people stand with him.”

For a long while now, millions of Americans have lost faith in our political institutions, especially our presidential elections.

This election has been eroding the faith of one bearded Michigander named Doug in these institutions. He and his friend, who did not want to be named, traveled to Washington together for the march. They had heard about the event a week ago. When talking about the election, Doug mentioned that if the allegations are not investigated, he will go as far as to never vote again.

“If they don’t look into these allegations—I don’t care who wins… but if they don’t do what’s right and recount and relook and redo the whole entire system, I will never vote again,” Doug said.