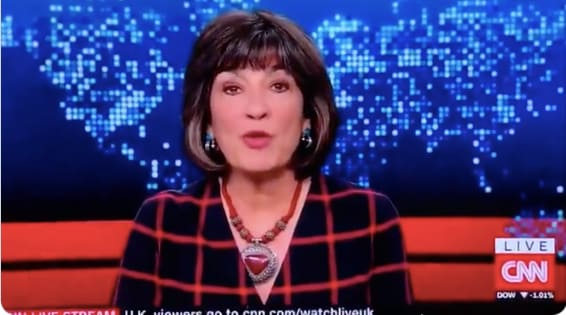 In a segment aired on CNN Thursday, Christiane Amanpour, CNN Chief International Anchor, commemorated the anniversary of Kristallnacht (or “Night of Broken Glass”) which occurred this week in 1938.

Kristallnacht was a Nazi-campaign of terror against Jewish people in Germany and Austria. It was also called “Night of Broken Glass” because windows of Jewish homes, synagogues and businesses were smashed.

It left approximately 100 Jews dead, 7,500 Jewish businesses damaged and hundreds of synagogues, homes, schools and graveyards vandalized. An estimated 30,000 Jewish men were arrested during the pogrom, many of which were then sent to concentration camps. Kristallnacht represented a dramatic escalation of the campaign started by Adolf Hitler in 1933 when he became chancellor to purge Germany of its Jewish population.

As Amanpour recalled Kristallnacht, she compared the tragic event to Donald Trump’s presidency, explaining there has similarly been a “modern day assault” attacking “those same values.”

“This week, 82 years ago, Kristallnacht happened. It was the Nazis’ warning shot across the bow of our human civilization that led to genocide against a whole identity. And, in that tower of burning books, it led to an attack on fact, knowledge, history and truth. After four years of a modern-day assault on those same values by Donald Trump, the Biden/Harris team pledges a return to norms, including the truth,” Amanpour said.

There was immediate backlash on social media.

StopAntisemitism.org, which is dedicated to exposing antisemitism, was one group that quickly called out Amanpour.

“Hey @CNN @camanpour please stop using the horrors of the Holocaust to justify an agenda. Our suffering is not yours to play political ping pong with,” they wrote on Twitter.

Another user wrote, “they are insane, not only are they diluting what the Nazis did they are blatantly pushing the narrative so hard it’s difficult not to believe there has been a fraud. How on earth can this be tolerated if 70 million Americans voted for Trump? This is close to inciting a riot.”