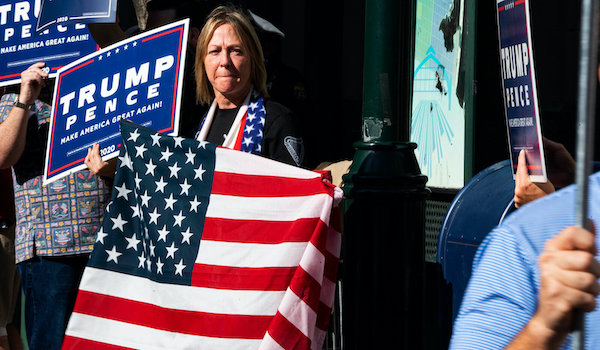 A software glitch in Antrim County, Michigan flipped thousands of Trump votes to Joe Biden. Trump and his voters are pointing to this as evidence of wide scale voter fraud. Was this just a random error? Or was it part of a more sinister plot to rig the election?

More than a week has passed since election day and several states are still counting votes. This is shaping up to be one of the messiest elections in recent history. The country is divided more than ever.

Some believe the American people rejected Trump by coming out in historic numbers to vote for Joe Biden. President Trump and many of his supporters believe this election was clearly stolen by the Left and there’s no way “Sleepy Joe” received 77 million legal votes. What are the facts?

There are some wild accusations of voter fraud coming in from several battleground states. The Trump campaign has filed multiple lawsuits and several states are doing recounts.

One thing we do know for certain, voter fraud did take place. In Michigan, Joe Biden is ahead of President Trump by 148,645 with 99% of votes counted. Every major news outlet has called the race for Biden. But in Antrim County, a voting machine error is being reported that turned Trump votes into Biden votes.

This isn’t some Trump campaign conspiracy theory. The Antrim County Clerk came forward and said, “tabulating software glitched and caused a miscalculation of the votes.” Since the error was reported, Michigan GOP Chairwoman Laura Cox has discovered that 47 out of the states 83 counties used this same flawed voting software. Now she is urging election officials to closely examine their results for similar discrepancies.

It attempted to alter our election and got caught? https://t.co/J8mcH4SpxG

The software in question is called Dominion Voting Systems. Investigators are currently working to determine if this was a software issue or a human error.

Trump beat Hillary Clinton in Antrim County back in 2016. Once the “glitch” was fixed it was found that Trump once again won the county in this election.

The Democrats should be cooperative and assist in any voter fraud investigations. If Joe Biden won fair and square, then so be it. But forcing him into office when half the country is not confident in the validity of the election results is a dangerous proposition.

Instead of bashing Trump and his voters for being concerned about voter fraud, the Left should prove their case to the American people.