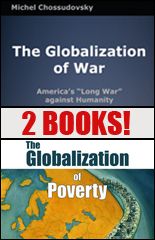 The Globalization of War: America’s “Long War” against Humanity by Michel Chossudovsky

America’s hegemonic project in the post 9/11 era is the “Globalization of War” whereby the U.S.-NATO military machine —coupled with covert intelligence operations, economic sanctions and the thrust of “regime change”— is deployed in all major regions of the world. The threat of pre-emptive nuclear war is also used to black-mail countries into submission.

This “Long War against Humanity” is carried out at the height of the most serious economic crisis in modern history. Read more…

This book is a skillful combination of lucid explanation and cogently argued critique of the fundamental directions in which our world is moving financially and economically.

In this new enlarged edition – which includes ten new chapters and a new introduction — the author reviews the causes and consequences of famine in Sub-Saharan Africa, the dramatic meltdown of financial markets, the demise of State social programs and the devastation resulting from corporate downsizing and trade liberalisation. Read more…

Save money! Purchase both of these titles for one low price:

The Globalization of War in PDF format: CLICK HERE

The Globalization of Poverty in PDF format: CLICK HERE

Ordering from within North America? Save big on large quantities:

Browse the rest of our titles and special offers on our online bookstore: