Today I spoke to an engineer who confirmed, again, that he was working indirectly for Soros with regard to the Dominion computers and the fraud software they ran.

I also had an interesting conversation with a fellow I know, who is a major Dem donor, in the millions a year class. I advised him that what he thinks he sees is an illusion of populist characters. That the game is between Freedom and a Communist Dictatorship. Not some cutie pie variants of political agendas. And of course: the miasma of Progressive is the reality of Regressive.

What a terrible thing for Conservatives altering a mentally disengaged women’s alleged rights over her body, to prevent the Genocide of the Voiceless. And, of course, who marries who is a matter of no interest. As who cohabitates with who is a meaningless delusional attempt at identity politics.

Those unable to see the real world, should step aside with their ignorant opinions, and let the grownups manage it.

A video with Newt Gingrich.

Other challenges concerning frauds are being investigated in eleven other states. Amazingly: only postured Dem states are at issue. If asked: what of the mail-ins for Trump; the answer is, ten million for Biden and a thousand for Trump. We’ll take the chance.

Biden is not 290, but below 270. Therefore not President-Elect, and hardly President. As he is now being referred to by propaganda media. Trump has not been advanced beyond the fake 214. His true number is well over 300. I recall his last count on the night being 295, and Biden nowhere in sight.

One more GOP Senator has been called. Saved from the jaws of the Lilly Livered Turdfish. As the mysteries of corruption were played out in the late night and early morning; Biden miraculously became 290 and Trump 214. And pigs definitely fly.

Propaganda Media is fully out on the limb. ABC, NBC, CBS, CNN, MSNBC, and the trojan horse, new member, FOX, and their charges, are fully invested in the fraud with election interference.

You will have problems accessing true information.

You have been experiencing an experiment in de facto state-controlled media delivered propaganda and censorship. If you like what you are experiencing and as an addition to a non-education, then a Communist Dictatorship awaits you. It doesn’t get better than that. Real Utopianism, as a century and well over two hundred million dead, will attest.

Biden is receiving Ra Ras after annoying foreign leaders. Johnson sent him a coded message, which Biden’s Intellgenzia Handlers missed. Iran wants to reopen the prior Iran Deal, and NATO sent regards and their urgent desire to finally be permitted to engage and subdue Russia. The tragedy is; that NATO actually believes its own frogshit. Who’s holding them back.

Remember when the joker Poroshenko donned his fatigues for photo ops, screaming that NATO was about to sail into The Black Sea and flush out The Russian Navy from The Sea of Azov. Of course, nothing happened, and Poroshenko lost to Zelensky.

Recall the USS Donald Cook was overflown by a SU-24 and magnetically disabled, requiring it to be towed out. (12/4/2014). https://youtu.be/qJFnDfvUVGc https://youtu.be/ylONaw4ODuk The Russian Military is considered rather generous, in suggesting that the life of NATO is some thirty minutes, should it arouse The Bear from its slumber.

I am of the opinion that Trump has denied us much entertainment. Biden’s handlers and owners being such great sports fans, almost makes it worthwhile to house those two Dem suckers in 1600 Pennsylvania Ave.

As I indicated; the total numbers of votes alleged as cast for Biden, do not compute, when added to those for Trump. The Unknowns and Deceased voting many times. The RNC is moving through the nation, opening cans of worms, in all alleged Dem state wins. Paraded by Dem Governors and Dem State Legislatures. It’s not smart voting for Dems in states and GOPs federally.

Why isn’t The DNC reciprocating with vote challenges? Because The GOP wins are transparent and correct.  Why would The DNC risk opening a debate, with further light shone on their frauds? It could only mean further GOP popular votes, and the exposure of The Dem State Collusions and coordinated vote frauds.

With the suicide of Fox commencing 4 November 2020; an aspect of which is the devastation of their advertising demographic base; it has also had the effect of destroying their leads of Carlson and Hannity. Now appearing respectively as 16th. and 17th. in current ratings. Good Bye subscribers.

Predictable as I wrote: when MCabe and Brazile were hired as ‘experts’, and Roberts began reading scripts in White House pressures.

This signals not only that Nationalist Populism destroyed Utopian Socialism, but that the monopolized Mass Media Model of Centralised Content and Dissemination, has been broken. The consumption of Information sitting in a vacuum. The Mass Society Model becoming The Network Society Model. Signaled by the 12 December 2019 destruction of The Left Benches in The Commons.

The problems of the current absurdity of The 2020 US Election being politely framed as; Interference, Irregularities, and Glitches. Rather than, Suppression, Fraud, and Criminality. Albeit The DOJ has begun Felony Investigations.

The issue is that The Information Vacuum will be filled by new, credible, Independent Media Platforms.

Let me further confuse those still coping with there not being a Left-Right Paradigm, with; Corporatism not being Capitalism, that Corporatism is Totalitarianism fronted by The Democratic Party in The US, and The Labour Party in The UK. And further: that Utopian Socialism is Totalitarian Communism, with over a century of clear evidence to that effect. It’s all to do with control of the herds.

In passing: The Dominion Computers and their software that caused ‘problems’ in some thirty states, are traceable (Intel) to being owned by our old friend Soros. Currently bunkered in Cyprus. Good Luck with that.

The Fat Lady remains seated in the wings.

Editor’s note: And to conclude with another Harold cartoon. 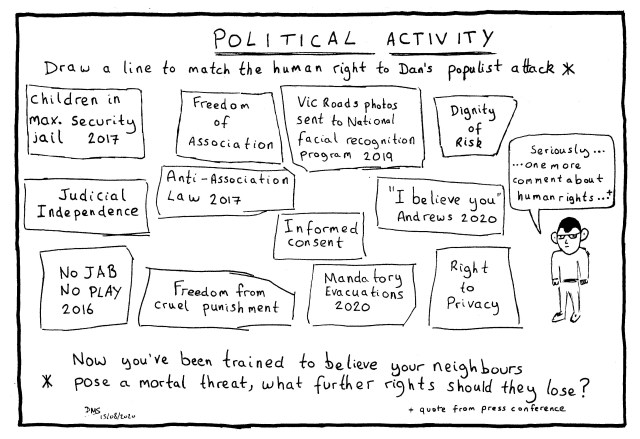 Hand Recounts, State Legislature Audits, and Court Orders are weighing in ahead of pending prosecutions. Some three million fraudulent ballots have been found in PA. All mail-in, and all for Biden.

In the questioned states: the ratio of Biden to Trump mail-in votes, does not approximate to that of personal votes. The votes are all for Biden.

I never suggested anything tagged Dem was gifted with smarts. Take up the hobby of watching House Committees.

In WI; ballot boxes were found to contain more ballots than constituents in those counties. Box Stuffing was found in 8 November 2916, for Madame President.

There is a tee-shirt making its way around. A rottweiler is performing a major crap. It’s another Biden ballot dump. State Republican Legislatures are acting as well as SCOTUS.

Trump has banned any Biden Transition Team from entering The White House Property.

Recall that America is under Martial Law since 14 September 2001. Trump just sacked Secretary of Defense Esper, on the advice of White Light Intel. Previously Deep State rumblings had been heard emanating from the direction of Esper.

Trump can call Regular Military, as well as Reserves, National Guard and State Militia Units, and rely on Citizen’s Militias. After all: Trump has the responsibility to protect The Constitution and the vast majority of American citizens who voted for him.

And of course: The Dems have pissed off every law enforcement body in the nation. Obama-Biden sacked over 240 generals who would not supplicate. Further flooding the military with puppets; since variously removed.

If these ballot frauds do not resolve by 20 January 2021, Trump will recall The House and demand they vote in a President. Irrespective of a prior Dem controlled House, which the nation suffered from 6/11/2018. Under The 12th. Amendment, The GOP controls The House by 31 to 19.