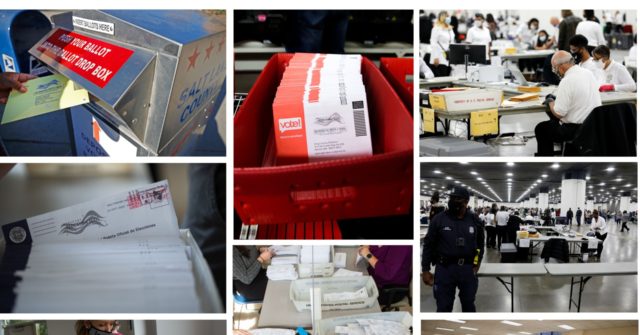 Rasmussen Reports, one of the most accurate pollsters of the 2016 and 2020 presidential elections, found 59 percent of likely voters are concerned “increased use of voting by mail will lead to more vote fraud.”

Let me just stop now to make something clear…

After the polling debacles of 2016, 2018, and 2020, it’s time for everyone to stop taking media polls and media-approved polls seriously.

Any poll released by Fox News, the Washington Post, ABC News, Reuters, Quinnipiac, NBC, etc… these are fraud polls. These are polls put together by propagandists and liars. We have now had three — three! — election cycles where these pollsters have been exposed as shameless liars, and anyone who pays attention to them is a fool looking to be lied to.

The pollsters who have proven themselves over the past few election cycles are Rasmussen, IBD/TIPP, Susquehanna, and Trafalgar.

The rest are all proven liars and hacks, and nothing they report means a thing. It’s all lies.

So if Rasmussen publishes a poll that says 59 percent of likely voters are worried about mail-in voting leading to vote fraud, I trust this poll.

When the proven liars at Reuters claim 80 percent of the public, including more than 50 percent of Republicans ,agree Biden is president-elect, you know that poll is a lie because the pollsters at Reuters lie.

That’s all they do is lie.

What’s especially fascinating about this Rasmussen poll is a surprising high number of Democrats — 36 percent, are very (24 percent) or somewhat (12 percent) concerned about the potential for vote fraud with mail-in ballots. That is a much higher number than you would expect, which means those are Democrats who are persuadable in putting a stop to the obvious fraud behind mail-in ballots.

Of course 62 percent of Democrats say they are not very (18 percent) or not at all (44 percent) concerned, but that number is still lower than I expected.

No one can have trust in this system, especially after what happened on Tuesday night when the counting in Democrat-run states and cities was going President Trump’s way and then — for the first time in my long experience — they STOPPED COUNTING.

I’m not saying there was enough fraud to tip the scales to His Fraudulency Joe Biden, but I sure as hell want to find out, and I sure as hell have lost confidence in American elections.

“The survey of 1,000 Likely U.S. Voters was conducted November 5 and 8, 2020 by Rasmussen Reports. The margin of sampling error is +/- 3 percentage points with a 95% level of confidence,” per the pollster.