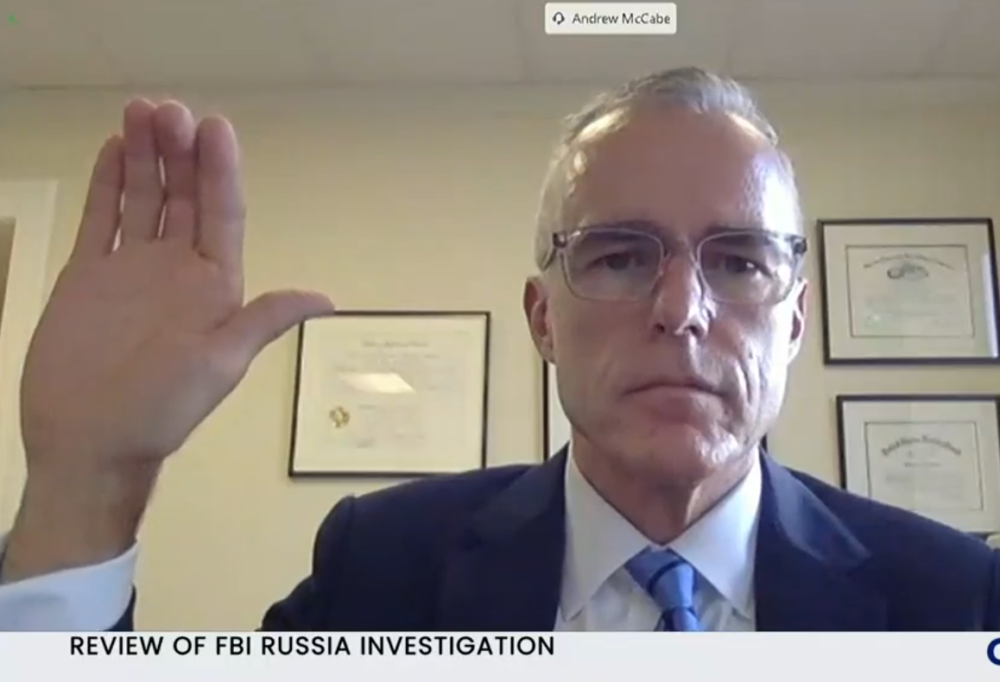 Former FBI Deputy Director Andrew McCabe was probed by lawmakers in the Senate Judiciary Committee Tuesday about his involvement in the FBI’s failed Russia collusion investigation. McCabe admitted “unacceptable” errors were made throughout the investigation, yet he insisted that as second-in-command, he was wrongly fired.

1. Admitted He Should Not Have Signed Spy Warrant

McCabe admitted he would not have signed the FISA warrant application to spy on Trump campaign associate Carter Page had he known it contained fabrications and inaccuracies.

“If you knew then what you know now, would you have signed the warrant application in June 2017 against Carter Page?” Senate Judiciary Committee Chairman Lindsey Graham asked.

Department of Justice Inspector General Michael Horowitz reported that he found 17 “significant inaccuracies and omissions” in the FBI investigation of Page and that the FBI failed “to include exculpatory evidence in its four successful applications for surveillance warrants.”

2. Said Trump Was a ‘Danger to National Security’

In his opening statement, McCabe denied the existence of bias or political leanings within the FBI, despite evidence such as text messages between FBI agent Peter Strzok and FBI lawyer Lisa Page promising to “stop” Donald Trump’s election as president.

McCabe insisted that Trump’s firing of then-FBI Director James Comey was an obstruction of justice and that it was just one of many reasons the FBI believed “the president might himself pose a danger to national security.”

“He might have engaged in obstruction of justice,” McCabe testified, “if the firing of the director and those other things were geared towards eliminating or stopping our investigation of Russian activity.”

3. Denied ‘Leaks’ to the Press

In a heated exchange, Sen. Ted Cruz, R-Texas, pressed McCabe on whether he went behind Comey’s back to leak information about an investigation into the Clinton Foundation to the press.

In 2018, the Horowitz report claimed that McCabe authorized leaks to the media with the intention of clearing his name of any supposed conflict of interest in the FBI’s investigation into Hillary Clinton.

“We concluded that McCabe’s decision to confirm the existence of the [Clinton Foundation] Investigation through an anonymously sourced quote, recounting the content of a phone call with a senior Department official in a manner designed to advance his personal interests at the expense of Department leadership, was clearly not within the public interest exception,” Horowitz wrote.

When Cruz asked if McCabe was authorized to leak to the media, McCabe responded, “I didn’t need James Comey’s authorization.”

“I didn’t ask if you needed it. I asked did he authorize you to disclose it. That’s a yes or no question,” Cruz pressed. McCabe said he himself authorized the disclosure, but also admitted that Comey was aware of disclosure to the press as well.

“You’re aware your testimony is 180 degrees opposite from Mr. Comey’s sworn testimony to this committee in which he insisted he has never authorized anybody to leak to the press?” Cruz asked.

“Your characterization of a leak is not accurate,” McCabe replied.

Ted Cruz getting in fiery exchange with Andrew McCabe about what James Comey knew and did in terms of authorizing the disclosure of the Clinton Foundation investigation to the press. McCabe argues Cruz’s characterization of a leak is not accurate pic.twitter.com/7NZ8jfTzkk

4. Insisted ‘There Were No Discussions of the Logan Act’

Cruz also brought up the recent news that former Vice President Joe Biden is already having conversations with foreign leaders, asking McCabe whether this qualified as a violation of the Logan Act, a 1799 law criminalizing political speech by American citizens that was used to justify investigations of former White House national security adviser Michael Flynn.

“[The Logan Act] was your flimsy political basis to go after a decorated war hero because you disagree politically with President Trump,” Cruz said, after McCabe said he would not “opine” on the Biden campaign’s actions.

McCabe denied Cruz’s characterization of the FBI’s investigation into Flynn, saying they “were not concerned he violated the Logan Act.”

“It is your testimony that the Logan Act was not a predicate for the FBI and DOJ investigation into General Flynn? Really?” Cruz asked.

“There were no discussions of the Logan Act,” McCabe doubled down.

As Cruz pointed out, there is indeed an abundance of evidence that the FBI conspired to pin their questioning of Flynn on potential Logan Act violations, despite the fact that no American has ever been successfully prosecuted under the law. According to Strzok’s handwritten notes, Biden mentioned the Logan Act at an early January 2017 meeting in the Oval Office. Documents and emails show that a few weeks later, FBI agents internally discussed using the Logan Act as a basis to continue their investigation of Flynn.

5. Believes He Did Nothing Wrong

Under questioning from Sen. Marsha Blackburn, R-Tenn., Tuesday, McCabe doubled down on his belief that he did nothing wrong, despite his earlier statement that had he known then what he knows now about the fabricated FISA warrants, he would not have signed off on it.

McCabe also cited the IG report, saying it “failed to find any evidence, documentary or testimonial, to indicate that the other mistakes in the FISA package were the result of intentional misconduct,” aside from FBI lawyer Kevin Clinesmith, who deliberately altered emails used to obtain the FISA warrants.

“Do you think you were wrongly fired?” Blackburn asked.

“Yes, I do think I was wrongly fired,” he said.

“And you think you did nothing wrong?” Blackburn asked.

“Even though the IG pointed out that you did. And even though you had a culture of corruption and cover-up, that you thought it’s OK to spy on Carter Page. It was OK to mislead Michael Flynn,” Blackburn said.

McCabe responded by saying he categorically denied Blackburn’s assertions. “No one that I’m aware of in the FBI conducted any activity that should leave them susceptible to criminal prosecution … including myself,” McCabe said.

McCabe was fired from the FBI in March 2018 after an IG report found he misled investigators about leaking to the media on the investigation into Hillary Clinton’s email servers. He is currently suing over his termination, claiming the firing was politically motivated retaliation driven by Trump.

BLACKBURN: “Do you think you were wrongly fired?”

BLACKBURN: “And you think you did nothing wrong?”