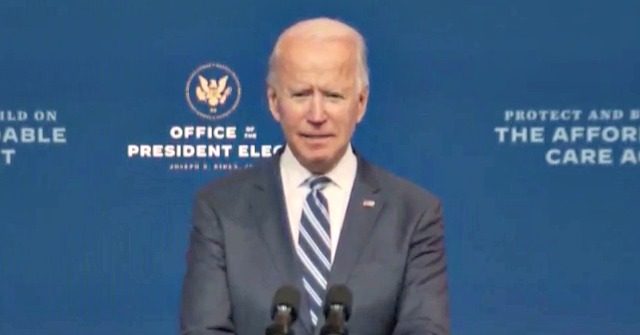 Joe Biden told reporters on Tuesday that it is “an embarrassment” that President Trump has not yet conceded the election.

While the media has declared Biden the “president-elect,” several battleground states, including Georgia, Pennsylvania, Arizona, and Nevada are still counting and reanalyzing ballots and counting procedures.

Nevertheless, Biden said it is “an embarrassment” that his opponent has not given up despite the conflicting opinions and legal challenges.

“The only thing that, uh, how can I say this tactfully, I think it will not help the president’s legacy,” Biden said.

He went on to acknowledge he has held discussions with foreign leaders and they are “hopeful that the United States democratic institutions are viewed once again as being strong and endured.”

Biden added that he thinks Trump supporters “are ready to unite.”

“I believe we can pull the country out of this bitter politics that we’ve seen the last 5-6-7 years,” he said, apparently lumping the Obama-Biden years in with the Trump years.