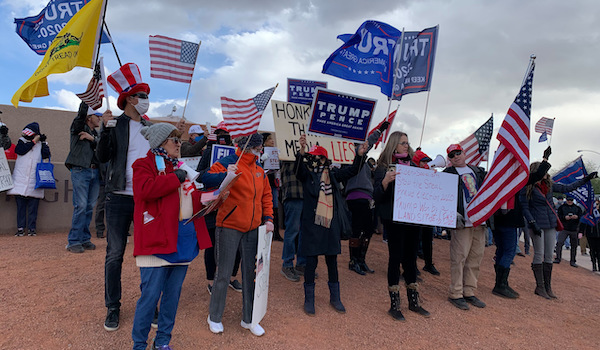 One Michigan Democrat is coming clean about his election fraud. A proud Communist in Detroit is claiming he threw away tens of thousands of Trump votes and his coworkers did the same. Did Biden win Michigan due to voter fraud?

Kiel Fauxton is a proud Marxist whose facebook account lists his employer as “The Democratic Party.” In a recent post he bragged about taking part in a massive voter fraud scheme. “Time to come clean. I work for Wayne County, MI and I threw out every Trump ballot I saw. Tens of thousands of them, and so did all of my coworkers.”

One facebook user was disgusted with the comment, posting “Fair election work from a self proclaimed Marxist.” To which Kiel Fauxton replied, “Why do they always say ‘self proclaimed Marxist’ you can just say Marxist.” Kiel Fauxton is quite the character. He has multiple facebook accounts, one of which displaying a photo of him holding an AK-47 in front of a Communist flag.

Since the post went viral, Fauxton has deleted his facebook accounts and started reaching out to news outlets to try and clear his name.

He emailed the site 100PercentFedUp.com and said, “I am humbly asking you to please update this. It was a joke for my few followers, I never intended to deceive anyone. I’ve never been a ballot counter. I made a big mistake and wish I could undo it. Thank you.” Was this just a sick joke or did this 32-year-old Communist Democrat really take part in a massive voter fraud scam?

The truth will be revealed soon. Trump has vowed to investigate instances of voter fraud in multiple battleground states. Michigan voted for Trump in 2016, just barely beating Hillary Clinton by 10,704 votes.

This year Biden won it by 164,123. Did the people of Michigan turn against Trump? Or is voter fraud to blame? There’s been multiple reports of voting machine software flipping traditionally red counties blue.

Dead people voting with absentee ballots and late mail-in ballots being postmarked before election day. Trump is vowing to investigate all of these claims.