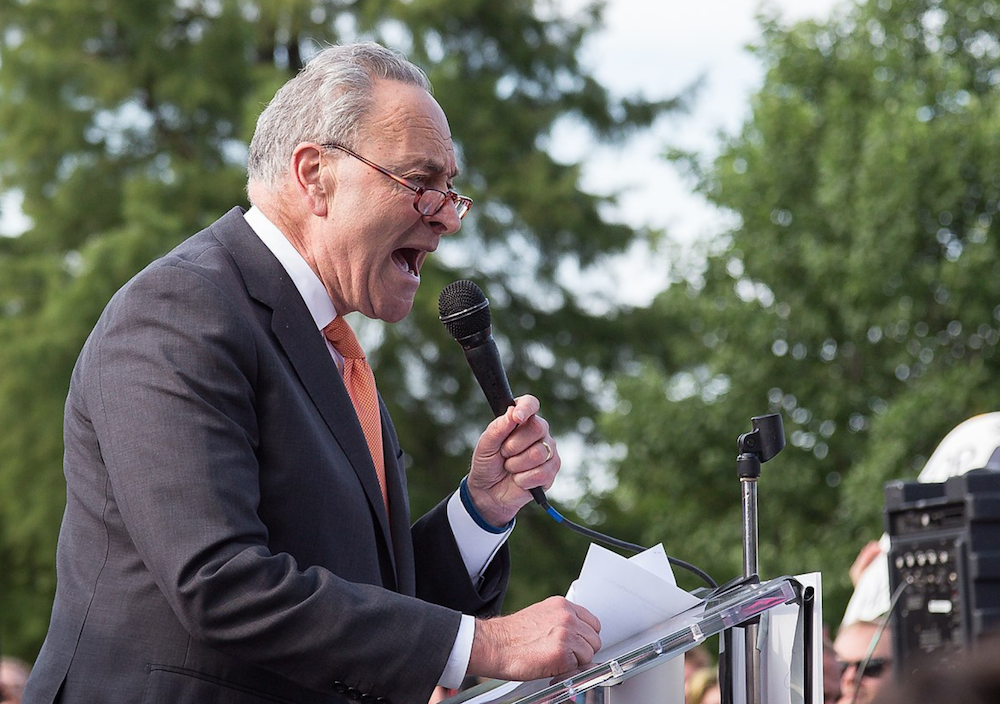 Senate Minority Leader Chuck Schumer waited only a few hours after several media outlets declared Joe Biden the winner of the presidential race before he declared the Democratic Party’s true intentions for the country should they reclaim the Senate. The control of the upper chamber of Congress will likely come down to two Georgia runoff races in January, since none of the candidates in either contest reached the 50 percent threshold to win.

“Now we take Georgia, then we change the world,” Schumer said, holding a black 2020 flag with a “no” symbol over a 45, denoting Donald Trump, the 45th president, and the words “Reclaiming my country.”

“Now we take Georgia, then we change America,” the New York Democrat said at what appeared to be a mass celebration in New York City.

“Now we take Georgia and then we change America” pic.twitter.com/uIoy1NRR62

As of the time of this writing, Biden leads in Georgia by 0.15 percent with more than 98 percent of votes reported. Although Biden has been declared the winner of the presidential race, litigation is pending in several states, with a recount coming in the Peach State.

While the GOP currently has a 53-47 majority in the Senate, Democrats picked up one more Senate seat and will need two more to achieve a 50-50 divide, making potential vice president Kamala Harris the deciding vote should Biden indeed win the presidency after litigation ends. One runoff race features incumbent Republican Sen. Kelly Loeffler, who filled the seat vacated by Republican Sen. Johnny Isakson earlier this year, against Democrat Raphael Warnock. The other runoff will be between Republican incumbent David Perdue and Democratic challenger Jon Ossoff.

Schumer’s commitment to “change the world” comes after a leaked call on Thursday in which Democratic leaders admitted that campaigns based on revolutionary, far-left social agendas hurt them badly in 2020, reversing their expectations of a “blue wave.”

“[If] we are going to run on Medicare for All, defund the police, socialized medicine, we’re not going to win,” House Majority Whip Jim Clyburn, a South Carolina Democrat, said on the leaked Democrat House caucus phone call.

If we run this race again we will get fucking torn apart again in 2022, Spanberger says

Rep. Bill Pascrell reportedly claimed House Speaker Nancy Pelosi had “done an amazing job,” but then shifted the blame to Schumer, whom Pascrell said is absent from Democrats’ larger conversation, tying one of Pelosi’s hands behind her back.

It just keeps going as Pascrell now calling out Schumer.
Pelosi’s done an amazing job … but where’s Schumer in all of this? Says Pelosi has one hand tied behind her back