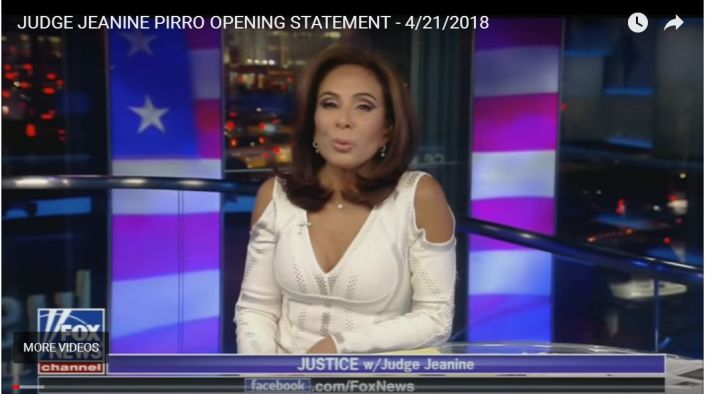 For those of you that might have tuned in and did not see Justice with Judge Jeanine Pirro on Saturday night, sources told Newsmax the show was suspended over a spat on the network’s coverage of President Trump.

Sources close to the network tell Newsmax, because she made a very staunch defense of President Trump and wanted to expose the vote fraud that took place in the election, Fox News decided not to air her show.

It had extended coverage of Democrat Joe Biden’s acceptance speech of a contested election.

The sources gave no inclination of whether the network is going to keep the show going, but we hear she was suspended at least for this weekend.

Fox News is not the only news organization scrambling to go decisively critical of President Trump.

The New York Times reported Rupert Murdoch’s tabloid, the New York Post, has shifted its tone on Trump as a top editor has planned his own exit from the reputed oldest newspaper in American history.

Fox News critically was the first, and for a longtime on Election Day, the only news organization to call the state of Arizona for Biden. Arizona’s 11 electoral votes, still in dispute in the state’s ongoing election count and with the Trump campaign, are pivotal to decide the presidential electoral college victor.

Newsmax, citing the close race under 20,000 votes and pending Trump campaign legal challenges, has not called the state of Arizona or Pennsylvania, leaving the true victor of the election still undecided.

As a result, Citizen Free Press will no longer link to any stories from Fox News or NY Post.

According to SimilarWeb data, Citizen Free Press has been the #1 referring site for both Fox News and NY Post every single month for the past 12 months.

Their free gravy train courtesy of CFP is now over.

I will still post live links to Tucker’s show — because those youtube videos are NOT from Fox News.

They are posted by pirates on youtube, and ZERO revenue goes to Fox.