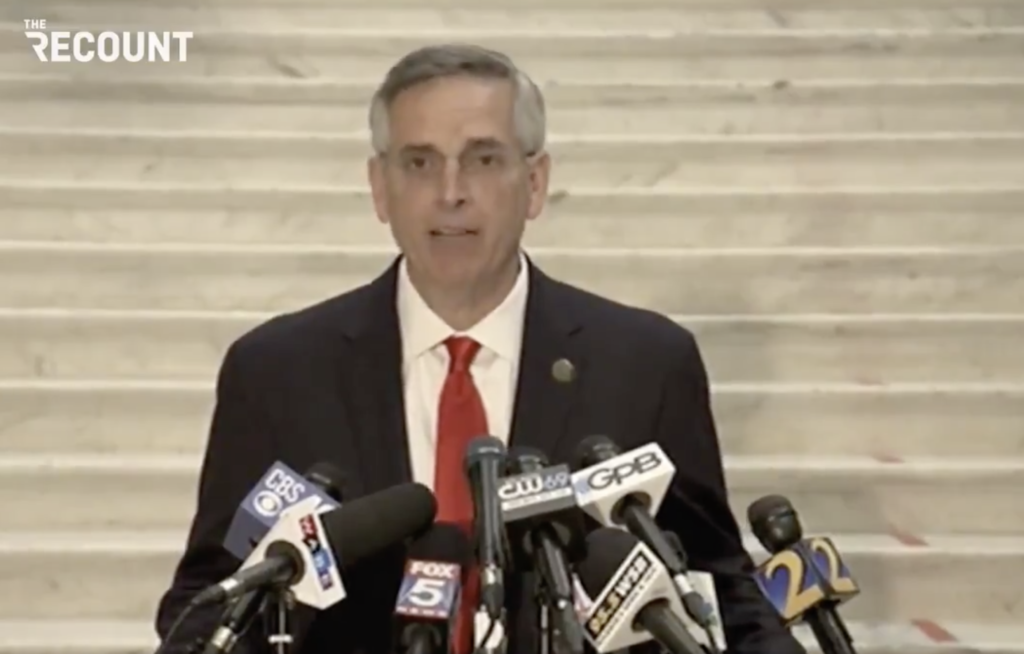 While Democratic Presidential Nominee Joe Biden edged ahead in the presidential race for Georgia, the Peach State’s secretary of state says the margin is too narrow to call and pledged to conduct a recount.

“As we are closing in on a final count, we can begin to look toward our next steps. With a margin that small, there will be a recount in Georgia,” he added.

“There will be a recount in Georgia.”pic.twitter.com/UKrY0SQrkr

While a recount is imminent, Raffensberger said that the administration’s focus is to continue to tally the 8,200 remaining absentee ballots in counties such as Fulton as well as receive and count any military, overseas, provisional, and cured ballots due to elections offices before close of business on Friday.

“The focus for our office, and for the county election officials, for now, remains on making sure that every legal vote is counted and recorded accurately,” Raffensperger said.

The Trump Campaign, in conjunction with the Georgia Republican Party, filed a lawsuit on Wednesday against the Chatham County Board of Elections demanding that they “enforce Georgia election laws, secure lawful absentee ballots, and prevent the unlawful counting of ballots received after the election” after the organization’s Chairman David Shafer tweeted that workers in Fulton County prevented Republican poll observers from monitoring voting tabulation and ballot counting.

According to Georgia law, ballots in counties must be received by 7 p.m. on Election Day to be valid.

“An unlawfully counted vote suppresses a lawful voter as thoroughly as if that voter was physically barred from voting at the polling place,” Shafer said in a statement.

A Georgia election official also confirmed that there is some evidence of voter fraud in the state, prompting possible investigations into the votes that could decide the state and the presidency.

Georgia election official Gabriel Sterling just said something very significant. He said there is no evidence of widespread voter fraud – but they are seeing some small things – and that in an election this close, small things can add up.

Georgia, a historically red state, began turning blue Thursday night as mail-in votes from counties housing Atlanta and Savannah were still being counted. Georgia’s political margins have narrowed in recent years, giving Democrats hope they would close the gap in 2020.

The state, however, will not be going down without a fight. Two U.S. Senate runoff elections are expected to be held in January between incumbent Republican Sen. David Perdue and his challenger Democrat Jon Ossoff, as well as GOP Sen. Kelly Loeffler fending off Democratic candidate Raphael Warnock.

Perdue’s Campaign released a statement Thursday afternoon pledging to fight for and defend the sitting senator’s seat, saying their team is not worried about Perdue losing in a runoff.

“There’s only one candidate in this race who has ever lost a runoff, and it isn’t David Perdue,” campaign manager Ben Fry said, referring to Ossoff’s congressional campaign defeat in 2017.

In 2016, Trump beat out former Democratic Presidential Nominee Hillary Clinton in Georgia with 50.4 percent of the vote, just more than 200,000 votes.

Both Trump and Biden visited the state in the last month, anticipating the closeness of the race for the Southern state with the president making his final stop in Rome two days before Election Day.