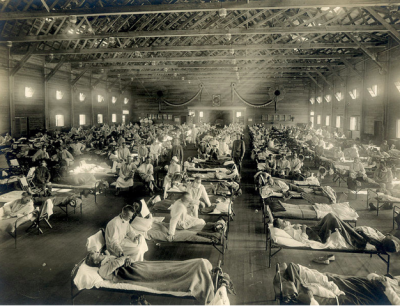 For long version of original Kevin Barry article, click this or this.

For over a century, various entities that are involved in the propaganda machinery that has been tasked by the powers-that-be to advance American patriotism and corporate profiteering have covered-up the truth about what actually started the epidemic of  what became known as the “Spanish Flu”, successfully obscuring what was actually a shameful experiment perpetrated by the Rockefeller Institute for Medical Research – the uber-wealthy entity that started the American Medical Association and the School of Public Health at Johns Hopkins University

For over a century, Americans have been led to believe that what was the true epicenter of the pandemic – US Army military bases – was actually the result of a Rockefeller Instutute vaccine experiment gone awry. The culprit vaccine, nicely documented by author Kevin Barry was perpetrated upon hapless military recruits at a variety of bases in the US. Spain had nothing to do with the epidemic, except for actually allowing its journalists to write about it.

The experimental vaccine was devised when the only vaccine that had ever shown any promise in preventing disease was the smallpox vaccine (which, when evaluated in retrospect, didn’t actually deserve credit for the disappearance of smallpox, since only a small minority of world citizens every actually received the vaccine.)

The crude experimental vaccine was intended to theoretically prevent bacterial (not viral) meningitis in soldiers, which had been a problem in past wars. Barry nicely documents the story that has been left out of the history books, ignored by the Mainstream Media, deleted from the Pentagon archives, and misrepresented by the pharmaceutical and medical industries, the NIH, the CDC, the NIAID and every corporation that seeks to profit from vaccinating as many infants, children and adults that they can. And that includes, of course, the widely discredited Bill & Melinda Gates Foundation that has spent hundreds of billions of dollars funding, founding and subsidizing corporations and other entities that promote universal vaccinations for whatever is proclaimed Big Pharma to be “vaccine-preventable disorders”)

A previous 4261 word Duty to Warn column can be accessed at various websites, including here.

Below are excerpts from the article that was written by author Kevin Barry, whose website is called First Freedoms.

“During the war years 1918-19, the US Army ballooned to 6,000,000 men, with 2,000,000 men being sent overseas.  The Rockefeller Institute for Medical Research took advantage of this new pool of human guinea pigs to conduct vaccine experiments.”

“The Rockefeller Institute and its experimental bacterial meningococcal vaccine, contrary to the accepted mythology may have killed 50-100 million people in 1918-1919.”

“The crude anti-bacterial vaccine used in the Fort Riley experiment on soldiers was made in horses.”

“According to a 2008 National Institute of Health paper, bacterial pneumonia was the killer in a minimum of 92.7% of the 1918-19 Pandemic autopsies reviewed.”

“In 1918, the vaccine industry experimented on soldiers…with disastrous results—but in 2018, the vaccine industry experiments on infants every day. The vaccine schedule has never been tested as it is given.  The results of the experiment are in: 1 in 7 of America’s fully vaccinated children is in some form of special education and over 50% have some form of chronic illness.” The “Spanish Flu” killed an estimated 50-100 million people during a pandemic 1918-19.”

What if the story we have been told about this pandemic isn’t true? What if, instead, the killer infection was neither the flu nor Spanish in origin?

Newly analyzed documents reveal that the “Spanish Flu” may have been a military vaccine experiment gone awry.

The reason modern technology has not been able to pinpoint the killer influenza strain from this pandemic is because influenza was not the killer.

More soldiers died during WWI from disease than from bullets.

The pandemic was not flu. An estimated 95% (or higher) of the deaths were caused by bacterial pneumonia, not an influenza virus.

The pandemic was not Spanish. The first cases of bacterial pneumonia in 1918 trace back to military bases, the first one in Fort Riley, Kansas.

From January 21 – June 4, 1918, an experimental bacterial meningitis vaccine cultured in horses by the Rockefeller Institute for Medical Research in New York was injected into soldiers at Fort Riley.

During the remainder of 1918 as those soldiers – often living and traveling under poor sanitary conditions – were sent to Europe to fight, they spread bacteria at every stop between Kansas and the frontline trenches in France.

One study describes soldiers “with active infections (who) were aerosolizing the bacteria that colonized their noses and throats, while others—often, in the same “breathing spaces”—were profoundly susceptible to invasion of and rapid spread through their lungs by their own or others’ colonizing bacteria.” (1)

When WW1 ended on November 11, 1918, soldiers returned to their home countries and colonial outposts, spreading the killer bacterial pneumonia worldwide.

During the pandemic of 1918-19, the so-called “Spanish Flu” killed 50-100 million people, including many soldiers.

Many people do not realize that disease killed far more soldiers on all sides than machine guns or mustard gas or anything else typically associated with WWI.

I have a personal connection to the Spanish Flu.  Among those killed by disease in 1918-19 are members of both of my parents’ families.

On my father’s side, his grandmother Sadie Hoyt died from pneumonia in 1918. Sadie was a Chief Yeoman in the Navy.  Her death left my grandmother Rosemary and her sister Anita to be raised by their aunt. Sadie’s sister Marian also joined the Navy.  She died from “the influenza” in 1919.

On my mother’s side, two of her father’s sisters died in childhood. All of the family members who died lived in New York City.

I suspect many American families, and many families worldwide, were impacted in similar ways by the mysterious Spanish Flu.

In 1918, “influenza” or flu was a catchall term for disease of unknown origin.  It didn’t carry the specific meaning it does today.

It meant some mystery disease which dropped out of the sky.  In fact, influenza is from the Medieval Latin “influential” in an astrological sense, meaning a visitation under the influence of the stars.

Dr Gary G. Kohls lives in the USA and writes a weekly column, entitled Duty to Warn, for the Duluth Reader, Duluth, Minnesota’s alternative newsweekly magazine. His columns deal with the dangers of American Friendly Fascism, corporatism, Oligarchy, militarism, racism, malnutrition, and Big Pharma’s over-drugging and over-vaccinating agendas as well as other movements that threaten the environment, democracy, civility, health and the sustainability and livability of the planet and the future of the children. Dr. Kohls is a frequent contributor to Global Research

Many of Dr Kohls’ columns have been archived at a number of websites, including: