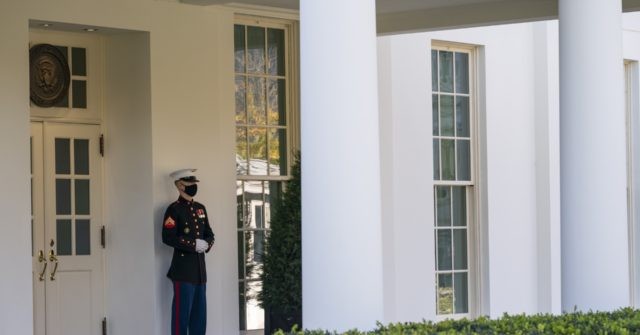 Andrew Bates, a spokesperson for former Vice President Joe Biden’s presidential campaign, said Friday that the U.S. government was capable of escorting “trespassers out of the White House” if Trump did not concede the election.

Bates, who directs rapid response for the campaign, was reacting to unconfirmed media reports that the president would not concede the election even if he had lost.

Amid reports the president might not concede the election, @JoeBiden spokesman @AndrewBatesNC says in part: “The American people will decide this election. And the United States government is perfectly capable of escorting trespassers out of the White House.”

Bates’s boss, in contrast, has tried to project a tone of reconciliation:

To make progress, we have to stop treating our opponents as enemies. We are not enemies.

Bates has a record of profane and misleading tweets on social media, as demonstrated during the campaign itself. In one instance, he imagined a voter telling a GOP canvasser to “Get the fuck off my doorstep before you give me coronavirus.”

Voter: Get the fuck off my doorstep before you give me coronavirus. https://t.co/CA1x3hoCuZ

The remark was intended to mock Republicans for going door-to-door — something the Biden campaign began doing itself shortly thereafter.

Bates also circulated false claims about the president during the campaign, such as the claim that he held a Bible upside-down in front of St. John’s Episcopal Church:

.@JoeBiden: “When the president decided he had to walk across from the White House through a group of peaceful demonstrators to an Episcopal church to hold a Bible upside down — which, I don’t know how often he reads…it was about, as his own people say…dividing the country.” pic.twitter.com/BUv4GisldC

As Breitbart News and even Snopes.com demonstrated, Trump held the Bible correctly.