After the latest drop from the state’s most populous county, home to the Phoenix suburbs, the gap between Trump and former Vice President Joe Biden, who is in the lead, narrowed from about 37,000 to 30,000 votes. While the race tightened, Trump only captured 55 percent of the latest batch, short of the 60 percent threshold he needed to remain on track to keep the state.

Biden, however, isn’t out of the woods yet, as about 92,000 votes in Maricopa County alone remain to be counted. Several rural counties in the state reporting positive numbers for the president also might make up the difference, such as Yuma County in southwest Arizona which is still counting. Arizona has only voted for a Democrat president once since 1952, which was in 1996 when it went for President Bill Clinton.

As the state continues to count the remaining ballots—joining Pennsylvania, Georgia, North Carolina and neighboring Nevada as states too close to call—Republican protestors continued their third straight night of demonstrations at the Maricopa County elections center, demanding greater transparency in the process and collectively praying for a Trump victory.

Group is back in prayer, a recurring activity with this group since Wednesday. pic.twitter.com/Ul8aap3suW

Demonstrators also vented outrage at Fox News and the Associated Press for calling the state too early for Biden. The Trump campaign and FiveThirtyEight’s Nate Silver have called on each outlet to retract what they’ve characterized as premature projections.

538’s Nate Silver on Arizona: “I sure as heck don’t think the state should have been called by anyone, and I think the calls that were previously made should be retracted now.”

On Wednesday, protestors were joined by Arizona Republican Congressman Paul Gosar who represents a western district in the state and was denied entry into the Maricopa County elections center. Gosar acknowledged to The Federalist on Thursday that he knew he probably wouldn’t have been given access to the building since his name was on the ballot, but said the attempt was to provoke election officials to address protestor concerns.

“What would have been nice is, to basically address us,” Gosar said. “Instead they hid.”

.@RepGosar has been denied entry into the Maricopa County elections center. pic.twitter.com/gg64viCKn0

Some of those concerns extended to select precincts in the area forcing voters to fill out their ballots using Sharpie markers which bled through the paper, spiking fears that some votes might be invalidated. Stories of people forced to use the markers, whose votes had not been counted yet, circulated on social media, giving rise to the phrase, “Sharpiegate.”

Local officials denied the allegations that Sharpies were used to invalidate ballots but the state still received enough complaints to spark an investigation by the Republican attorney general. On Thursday, the Arizona attorney general’s office concluded that no voters had been disenfranchised by the use of Sharpies.

Based on correspondence and conversations with Maricopa County officials, we are now confident that the use of Sharpie markers did not result in disenfranchisement for Arizona voters. We appreciate the county’s prompt insight and assurances to address public concerns. pic.twitter.com/NdYLsEAvwd

Gosar sought access to the Maricopa County elections center again Thursday night when demonstrators met for a second time. Despite no protestor violence Wednesday, when Trump supporters seemingly spent half the night praying, officials erected a fence in the parking lot to create a wider perimeter around the building. Only staff, security, and media were allowed on the side of the barrier closer to the building. Protesters were restricted to what signs labeled as free speech zones. 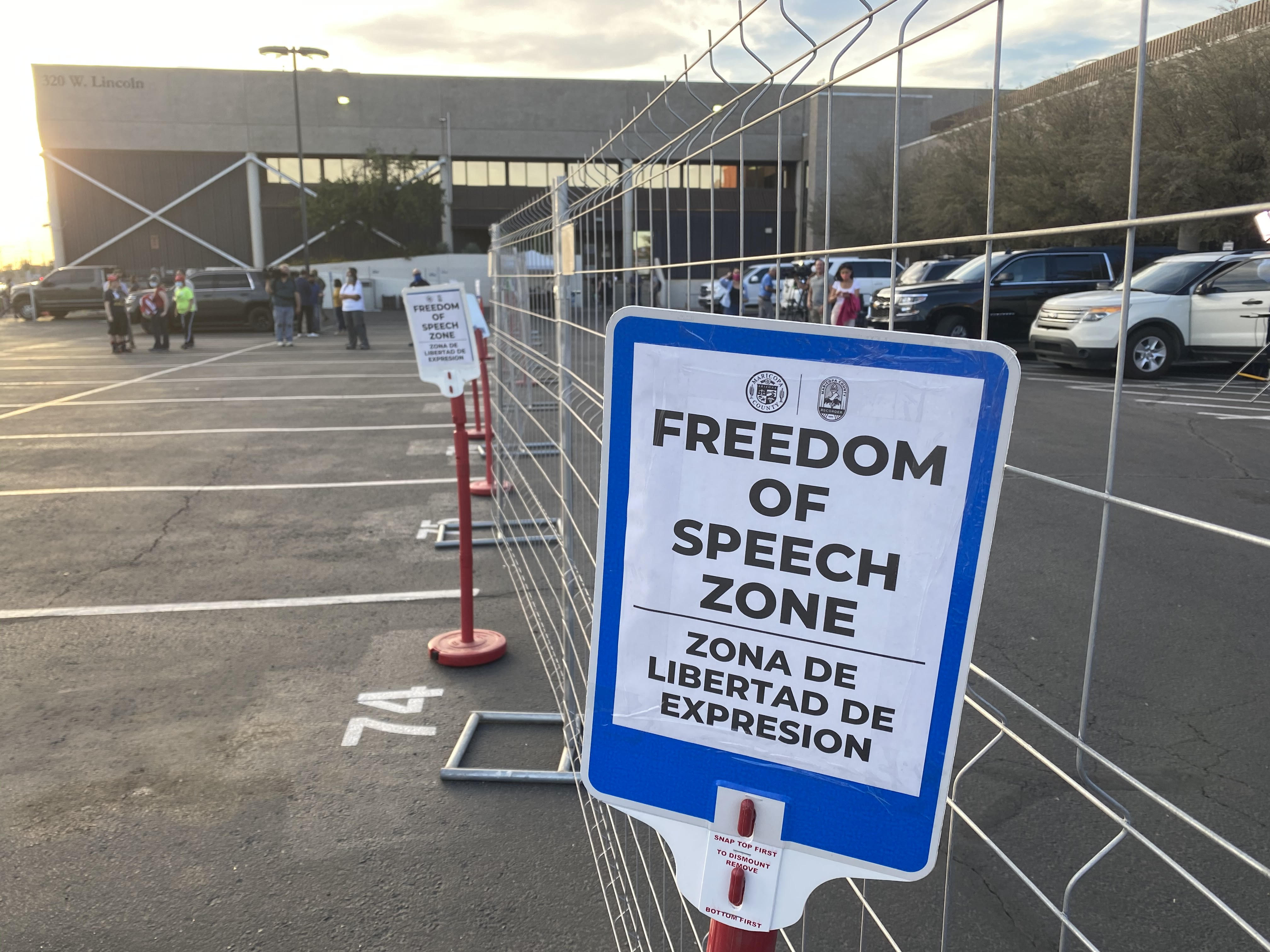 Gosar’s presence Thursday night was later overshadowed by controversial conspiracy theorist Alex Jones, who was met by an eager crowd that welcomed him as a patriotic folk hero swooping in to save the democratic process.

This moment, Alex Jones tells Trump supporters in Arizona, is “as important as 1776, July 4” pic.twitter.com/26pSbv2FWQ

Jones aired grievances at all the typical targets of the his online ire, including Democratic elites and big tech “globalists.” When asked how Big Tech censorship would fare under a Biden administration, Jones told The Federalist, “Communist China is the model.”

My entire interview with Alex Jones on his way out.

Q: What will big tech be like under Joe Biden? Will censorship be worse?

Jones: Communist China is the model.

Jones made a second surprise appearance Friday night to take aim at Bill Gates and Dr. Anthony Fauci, each of whom Jones named in chants to “burn in hell,” the night before.

The protests Friday night, however, began to taper off soon after Jones left. A smaller group of demonstrators continued to pray while the parking lot adopted the vibe of an Independence Day tailgate.

The night did draw several independent counter-protesters but remained non-violent.

In one encounter, a white counter-protestor began to lecture a black Trump supporter named Auludyn Greywolfe on race.

Counterprotester loses his cool when asked “what has Biden done for blacks?” pic.twitter.com/Abum3nzjic