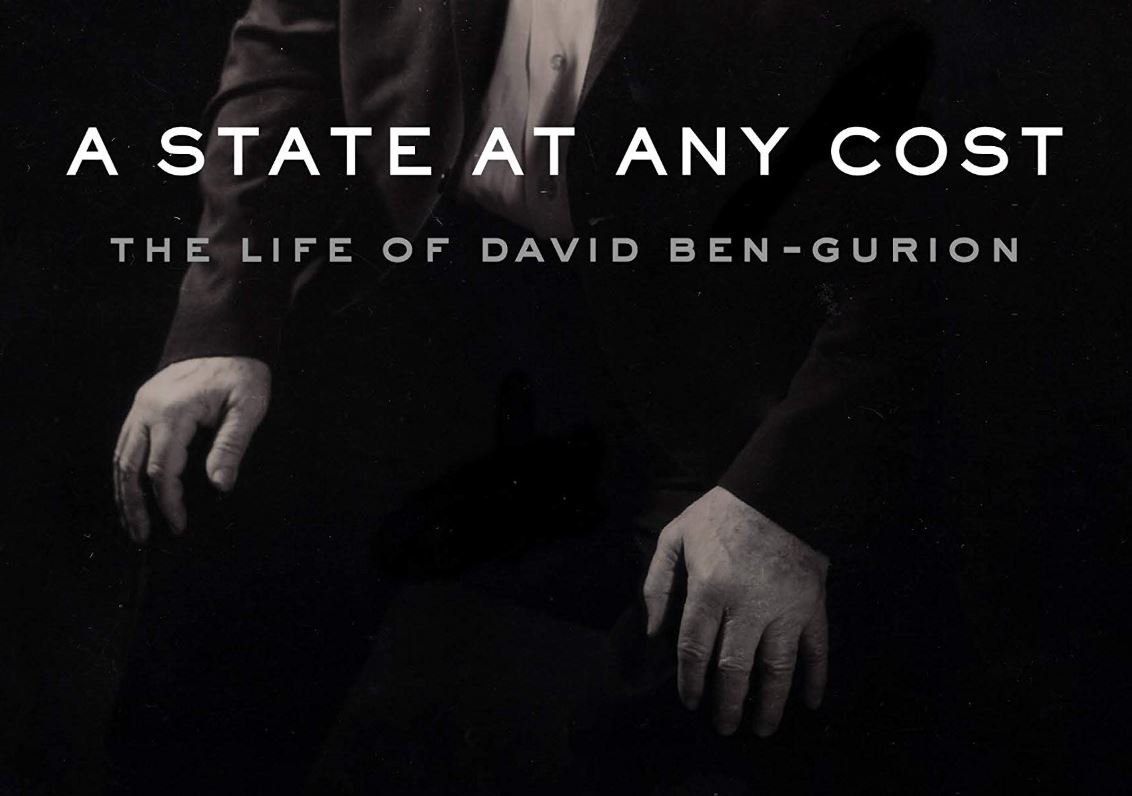 “In the Land of Israel,” David Ben-Gurion, the Jewish state’s first and still foremost prime minister, once said, “anyone who doesn’t believe in miracles is not a realist.”

Born in 1886 in Plonsk, then a part of Russian Poland, Ben-Gurion embraced Zionism at an early age, relocated to the Holy Land 20 years later, and promptly set about making Jewish miracles a reality.

In A State at Any Cost: The Life of David Ben-Gurion, Israeli historian Tom Segev’s exhaustive and highly readable biography of Ben-Gurion, those miracles of leadership, of military victory, and of socioeconomic achievement remain on vivid display, as even Segev – a founding member of Israel’s school of left-leaning “new historians” – somewhat grudgingly concedes.

Ben-Gurion was Israel’s George Washington, the founding father par excellence whose legendary status and unimpeachable commitment to the Jewish state remains unequalled among Israeli statesmen. “The Zionist dream,” Segev writes, “was the quintessence of his identity and the core of his personality, and its fulfillment his greatest desire.” Largely responsible for the return of the Jewish people to sovereignty in their historic homeland for the first time in two millennia, the Old Man, as Ben-Gurion is known even today, can rightfully take his place as a titan of Jewish history, alongside Moses, Joshua, King David, and Ezra the Prophet.

But perhaps because he’s a more recent figure than Washington, or perhaps because of Israelis’ general skepticism of authority, Ben-Gurion’s many flaws shine through the hagiographic gloss applied by his many biographers. In A State at Any Cost, a gripping and smoothly-told narration of the Old Man’s experiences, Segev doesn’t shy away from exploring these faults alongside Ben-Gurion’s many triumphs. The mountains of archival material Segev perused, he claims, “demonstrate[] Ben-Gurion’s forcefulness, merits, and achievements, but also his limitations, weaknesses and failures.”

The overall portrait that emerges is of an archetypical pragmatist. While sympathetic to labor socialism, and partial to Jewish nationalism, Ben-Gurion was anything but a rigid ideologue. “His willingness to pay nearly any price to realize the Zionist vision was on occasion coupled with tactical concessions and pragmatic compromises.” Time and again, the Old Man bent his principles to accommodate the larger thrust of what he regarded as Jewish destiny.

For instance, the Zionist Social Union of the Workers of the Land of Israel, the unified party Ben-Gurion forged and led for decades, considered itself a branch of the worldwide labor movement. But as Segev notes, “it carefully avoided radical language” and eschewed any mention of the dictatorship of the proletariat or class struggles. More generally, “whenever a contradiction between Zionist and socialist interests arose, he always chose Zionism.”

He negotiated with Adolf Hitler’s regime for the emigration to Palestine of Jewish children under the Fuhrer’s occupation in exchange for the repatriation of Germans residing in the Holy Land. And over the strenuous objections of the Revisionists, his right-wing opponents in the Yishuv, he successfully negotiated with the Nazis for the release of tens of thousands more Jews.

Ben-Gurion’s approach to religious affairs similarly reflected his pragmatic streak. An avowed secularist, albeit a traditional one, the Old Man engaged in spirited intellectual and political battles with the rabbinic establishment over issues ranging from military exemptions for yeshiva students to shuttering businesses and public transportation on the Sabbath to awarding the rabbinate a monopoly over marriage, divorce, and conversion. While Israelis nearly 80 years later continue to vigorously debate this religious-secular status quo, Segev posits that the compromises Ben-Gurion brokered in the 1940s and 50s “exhibited his political acumen, his experience, and, more than anything else, his patience.”

Even his rivalry with the Revisionists, led by the charismatic Ze’ev Jabotinsky and later by Menachem Begin, wasn’t deeply rooted in ideology. “Ben-Gurion,” Segev reckons, “was no less nationalist or militarist than Jabotinsky. The right-left divide in the Zionist movement was largely a matter of style and modes of operation, not fundamental values.”

Ben-Gurion evinced a deep commitment to the Jewish people’s right to settle the entire biblical land of Israel, on both sides of the Jordan River, as the 1917 Balfour Declaration suggested; “I believe that to this day,” he said as late as 1947. Yet he gratefully accepted the various territorial compromises presented by the British authorities and the United Nations, partly on the theory that even “in ancient times, the boundaries of Jewish independence retreated and advanced in accordance with constant political change.”

Ben-Gurion’s diaries, correspondence, and public statements reveal him to be a deeply complex, introspective, and, at times, depressed psychological study. “He had a capacity for sensitive and courageous self-examination and a willingness to undertake it,” Segev asserts. “This, too, is part of what makes him so fascinating a figure.”

Intellectually curious and incurably addicted to buying books, Ben-Gurion was tormented by the Holocaust, particularly the impotence that afflicted him, his party, the Jewish Agency, and world Jewry in general as the catastrophe unfolded in slow motion across the European continent. His tortured marriage to Paula and distant relationship with his children didn’t help, nor, likely, did his occasional tendency to disappear for months to London, New York, or Paris.

He also struggled mightily with the promise and challenge of Arab-Jewish coexistence. His initial encounters with Arab neighbors in Palestine were mixed, as Jews and Arabs jockeyed for jobs and land. “The country that Ben-Gurion and his friends found when they arrived in 1906,” Segev writes, “was awakening into the twentieth century after a long slumber. It was a frantic and charming jumble of colorful idealistic initiatives and religious delirium, of bold breakthroughs and hesitant beginnings and myriad fantasies.”

In Sejera, an Arab village in the Galilee bordered by a Jewish agricultural settlement, Ben-Gurion first experienced violence when two of his friends were murdered by Arab farmers, a bitter tragedy tattooed into his memory for decades hence that informed his broader views. While some activists, like those in the leftist Brit Shalom and Hashomer Hatzair organizations, favored a binational Arab-Jewish state, Ben-Gurion and the vast majority of the Yishuv regarded such an arrangement as utterly unworkable.

In the 1930’s Ben-Gurion forthrightly acknowledged the “horrible difficulty of a foreign force uprooting some hundred thousand Arabs from the villages they have lived in for hundreds of years” and recognized that many Arabs would need to be incorporated into a future Jewish state. But he also appreciated that if the Jews did not form a majority of their own sovereign political entity, they would be subjected to “the claws of the fate that pursues them in the lands of their Exile.”

Ben-Gurion also miscalculated on several important occasions. He backed Ottoman Turkey, where he’d briefly resided and studied in the 1910s, against the British, who conquered Palestine in 1917 and administered it for three decades. He openly challenged Chaim Weizmann, his arch-nemesis, before a tribunal of prominent American Jewish leaders but was easily defeated.

While in office, the Kastner and Lavon affairs demonstrated a profound lack of responsibility and control over wayward subordinates. The 1956 Sinai Campaign, in which Israel conquered the Sinai Peninsula but was compelled by Soviet and American pressure to return it to Egypt shortly thereafter, reflected a certain arrogance and diplomatic overestimation.

Perhaps most problematic, while Ben-Gurion helped rescue thousands of Jews from Hitler’s Europe, he downplayed and ultimately squandered the opportunity to rescue perhaps hundreds of thousands more. He despaired at the enormity of the cataclysm of those under the Nazi boot and balked at the massive expense and effort required to evacuate them to Palestine; Segev characterizes him as “blinkered by his view that only handfuls of Jews, if any at all, could be saved before the war ended.” But he also evinced a certain blind spot for “undesirable” European immigrants who would drain the yishuv’s resources and almost certainly relocate to the United States soon after arriving in Palestine.

The Old Man redeemed these shortcomings, at least in part, in the wake of the establishment of the state when he vigorously championed the immigration to Israel of hundreds of thousands of Mizrachi Jews, who were fleeing persecution in Islamic lands. While many in his party regarded these new arrivals from Middle Eastern and North African countries as little more than primitive savages, Ben-Gurion castigated them for espousing these views, however condescendingly.

“In them, too,” he told Parliament in 1950, referring to Mizrachi immigrants, “are hidden rich springs of pioneering capacity, springs of heroism and creation. If we invest here, as well, the efforts we made with Jewish youth in the lands of Europe – we will receive the same welcome results.”

Segev’s book is marred by several flaws. First, it’s surprisingly light on supporting visuals, especially maps, given the critical importance of borders and populations to his story; in particular, the utter absence of any maps from a chapter specifically entitled “Maps” is nothing short of baffling.

Second, Segev devotes a scant two pages to summarizing the extensive and intensive lobbying efforts in which the Yishuv leadership engaged in late 1947 to persuade at least two-thirds of the UN General Assembly to approve the partition plan. He similarly fails to explain why the fateful November vote, which provoked celebration in every Jewish city, dejected Ben-Gurion so gravely.

Third, and more importantly, Segev paints an incomplete at best (and misleading at worst) picture of Ben-Gurion’s approach, during the 1948 War for Independence, to the flight of Arabs from areas designated by the Partition Plan for Jewish sovereignty. Segev’s reference to Plan Dalet, a military order to clear hostile Arab forces from strategic areas, wrongly suggests the Haganah targeted civilians, which it manifestly did not, as I’ve explained elsewhere.

And his selective quotation of the Old Man’s pronouncements masks Ben-Gurion’s genuine desire to fully incorporate Arabs into the warp and woof of the Jewish state; in the middle of the conflagration, Ben Gurion forthrightly proclaimed that “in our state there will be non-Jews as well—and all of them will be equal citizens; equal in everything without any exception; that is: the state will be their state as well.” This sentiment later found formal expression in Israel’s Declaration of Independence, which guarantees to the “Arab inhabitants of the State of Israel…full and equal citizenship and due representation.”

But in the end, even Segev can hardly argue with Ben-Gurion’s bold proclamation that the establishment of Israel constituted “the greatest political marvel of the twentieth century.” Warts and all, the Old Man, and the state he created ex nihilo, remain miraculous.