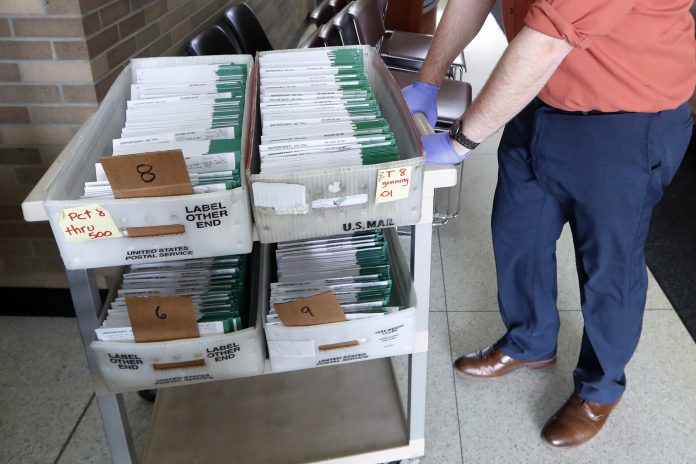 Stuart Sandler is a consultant for James’ campaign, and had been observing the vote count as a volunteer lawyer. Sandler told Fox News that the campaign alleges there were a “lot of irregularities” during the counting process that must be looked into.

“There were all kinds of chicanery, including ballots that came in reportedly in the middle of the night at 3:30 a.m. – 35,000 ballots that were deceptively brought in.

James had a significant lead over the incumbent right up until the early hours of Wednesday morning, until a former state Democratic chairman stepped in. Sandler alleges that the Democrat, Mark Brewer, organized the arrival of dozens of activists and lawyers to the TCF center in Detroit to “disrupt the process.”

“There’s a lack of integrity there. The people of Michigan made their choice and they’ve been trying to disrupt the process. And we’re reviewing our options,” Sandler explained.

In an interview with the AP, Brewer claimed that the process was the cleanest and most effective Detroit had ever had. “This is the best absentee ballot counting operation that Detroit has ever had. They are counting ballots very efficiently, despite the obstructing tactics of the Republicans,” he said.

Peters was declared the winner on Wednesday evening, somehow edging his opponent out by just over 70,000 votes. Though the GOP is still going to keep its majority in the Senate, conservatives were hoping that James, who is an African-American businessman and Iraq War veteran, could flip the seat.

President Trump tweeted about the suspicious election, stating: “Wow! It looks like Michigan has now found the ballots necessary to keep a wonderful young man, John James, out of the U.S. Senate. What a terrible thing is happening!”

Wow! It looks like Michigan has now found the ballots necessary to keep a wonderful young man, John James, out of the U.S. Senate. What a terrible thing is happening!

“President Trump’s campaign has not been provided with meaningful access to numerous counting locations to observe the opening of ballots and the counting process, as guaranteed by Michigan law,” said Trump 2020 campaign manager Bill Stepien.