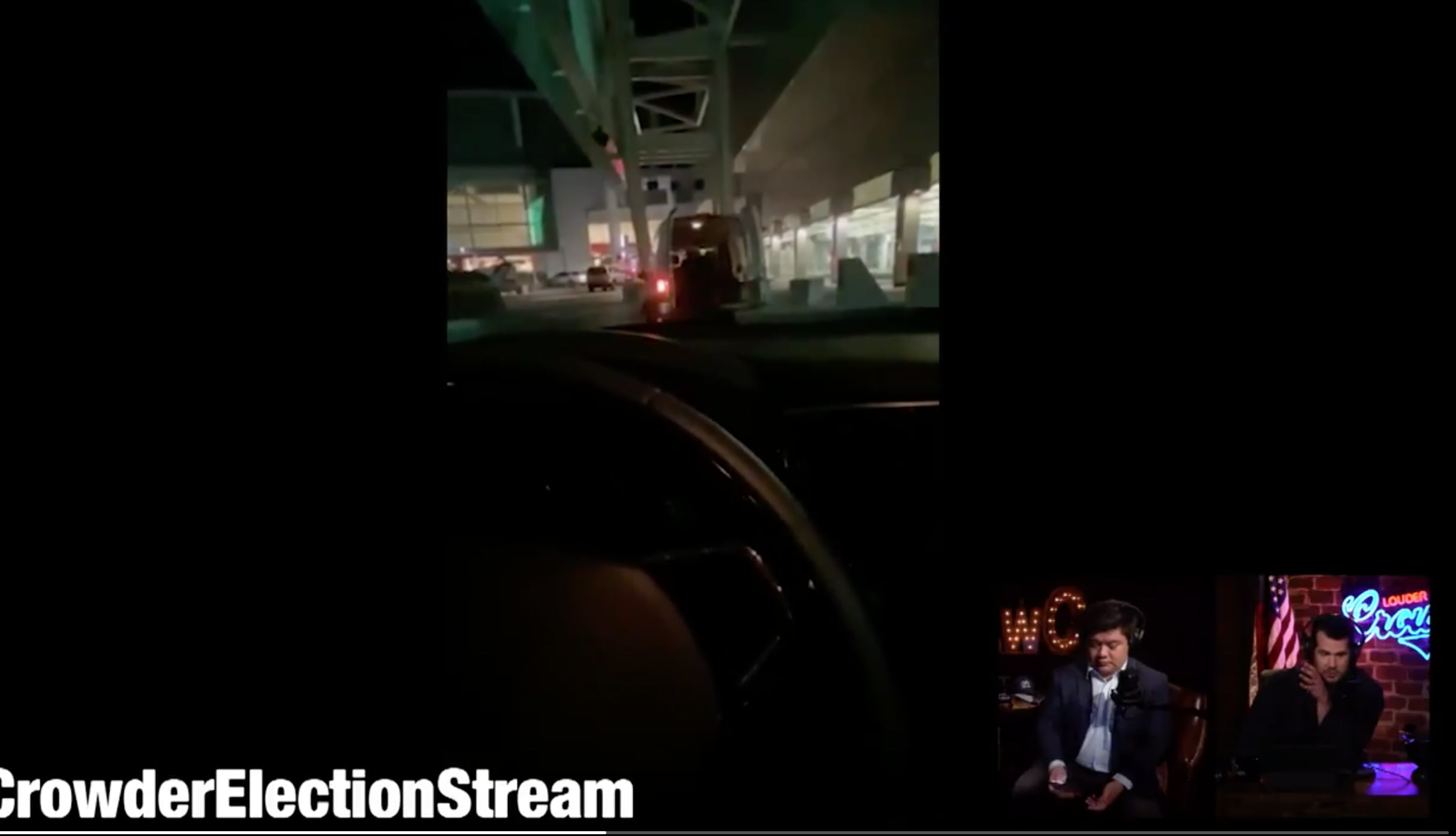 This photo is a screen shot from a Texas lawyer working with the Trump campaign. It allegedly shows suspicious activity at a ballot counting center in Michigan. (screen shot taken from Louder with Crowder Twitter repost Nov, 2020)

Suspicious election night videos, poll workers blocking observers and a shady ballot counter captured on camera in Atlanta frustratingly crumbling up what appeared to be a ballot (couldn’t tell) in his hand and tossing it away.

These are just some of the videos and complaints surfacing on social media this presidential election cycle. Are they what they appear to be? Who knows but these incidents and others like them need to be investigated. The Trump campaign has now launched lawsuits in Nevada, Michigan, Georgia and Pennsylvania.

It’s still too early to call the vote in Arizona, Pennsylvania, North Carolina, Georgia, Nevada and Alaska. Although Fox News called Arizona for Former Vice President Joe Biden, the cable network was highly criticized for the decision, but the New York Times, which also gave Arizona to Biden pulled back the electoral count on Thursday morning.

What’s going on in this heated election in America, however, isn’t just being monitored in the United States but around the globe. The failure to get the votes counted on time, lack of transparency at some of the designated ballot counting stations and some questionable actions by those running the polls is leaving people overseas and at home scratching their heads.

I’m left wondering how this happened in our country and will it be resolved?

Steven Crowder on his web show Louder with Crowder, interviewed one of the lawyers for the Trump campaign that captured this video in Detroit, Michigan. In the video a man can be seen loading up a a red wagon from a white van in the early morning hours and taking it in to a Detroit ballot counting site.

The video was taken by a Texas lawyer, Kellye SoRelle, raised serious concern that a “box may have been a ballot box that arrived long after all ballots were expected to have been received at the counting facility.” She’s a member of Lawyers for Trump and in the footage a person in a white van was filmed loading up a red wagon outside the ballot location.

“There’s no one around,: says crowder. “That does not look like a bustling ballot counting operation.” He goes onto describe other issues – like the coolers being carried into the center. He also noted that the polls have been closed for hours and there should have been no counting.

Trump’s campaign lawyers have filed a lawsuit in Michigan, in addition to other swing states.

They said in statement that “we have filed suit today in the Michigan Court of Claims to halt counting until meaningful access has been granted. We also demand to review those ballots which were opened and counted while we did not have meaningful access.”

It wasn’t just Michigan, people had a right to be concerned about universal mail-in-ballots because they were not requested by the voter, as an absentee ballot would be.

Former Ambassador to Germany and acting Director of National Intelligence Richard Grenell, who is now overseeing issues with the ballots in Nevada Thursday, retweeted a video showing someone who was born in March, 1902 registering to vote and voting in the Michigan election.

“Recklessly throwing ballots in the mail means illegal votes come back,” said Grenell. “Non-residents and dead people have voted. Democrats planned this. It’s an attack on our Democracy. We must only count LEGAL votes.”

Another questionable issue was the use of Sharpie pens in Arizona. Although the Arizona board of elections said the use of a Sharpie pen is authorized, others complained that when the pen leaked through the ballot it would become invalid.

The situation is being investigated, according to Arizona Attorney General Mark Brnovich. He said in a letter he posted Wednesday night that his office is investigating claims that hundreds of ballots were tossed or rejected by the use of sharpies. That’s not been confirmed but according to reports in Maricopa County there were people at the polls passing out Sharpies instead of pens.

Brnovich tweeted out a letter sent by Arizona Deputy Solicitor General Michael Catlett demanding Maricopa County Director of Election Day and Emergency Voting Scott Jenson answer questions regarding complaints lodged by hundreds of voters who may have been disenfranchised because they were given Sharpies to fill out their ballots.

Maricopa County has a significantly higher Republican base and concern that ballots were tossed or not counted began Tuesday with voters complaining on social media platforms, as well as complaints being lodged with the Emergency Voting Office, according to reports.