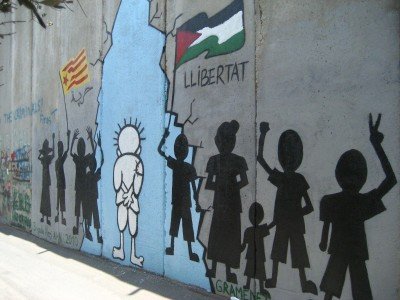 In the largest West Bank demolition operation in a decade, Israeli military authorities on Tuesday razed around 70 structures in the Jordan Valley’s Humsa al-Fuqa community in the occupied West Bank. Locals reported that six bulldozers, accompanied by around 100 Israeli soldiers, carried out the demolitions, leaving 11 Palestinian families homeless.

Among the demolished structures were those seemingly funded by the European Union and other European governmental and non-governmental institutions.

“They startled us with no prior notification,” says Abdul-Ghani Awawdeh, 52, who lost every residential structure on the land where he lives, including animal shelters, water tanks and solar system units. Israeli forces also confiscated his car.

Awawdeh’s wife, Fadwa Abu Awwad, noted that the demolitions were happening at the “worst time of the year” in terms of the weather. She said she spent the first night following the demolition trying to protect her family’s furniture from rain, after sending her children to a nearby community.

“We slept on the ground covered with a plastic bag,” Awawdeh added.

The Awawdeh family said they have been renting the land from Palestinian owners for over 60 years in order to herd animals, and confirmed this was the first time they witnessed an Israeli demolition. However, they remained uncertain as to whether it was a one-off or a sign of things to come.

A little over a mile away from Awawdeh’s family, 11 members of Abu al-Kebash family also saw all of their structures and animal shelters razed. Ahmad Abu al-Kebash, 23, said the family has been renting the land from another Palestinian family for around 70 years, and that this was not the first time the Israeli military had conducted demolitions, confiscations or evacuations at the site.

“This demolition is like no other. They left nothing,” said Ahmad, while sheltering in a tent provided by the Palestinian Red Crescent following the demolition.

Dafna Banai, an Israeli who has been active in the Jordan Valley for the past 13 years, called it the “worst demolition” she’d seen during her time in the area.

Israel insists that Humsa al-Fuqa’s residents do not have property rights on the land where they live, and claim that evacuation orders are for residents’ safety due to the area being a firing zone — which Israel designated it in 1972. The military has declared around 18 percent of the West Bank a firing zone, according to UN statistics, affecting thousands of Palestinians.

Declaring Palestinian land as a firing zone is just one of many justifications Israeli authorities give for issuing demolition and evacuation orders in Area C of the West Bank, which is under full Israeli military and administrative control. Frequently, demolitions are also carried out on structures built without permits, although Israel’s military government in the West Bank only approves between 1 and 3 percent of Palestinian building permit requests.

Israeli demolitions and displacement of Palestinians in Area C form “a strategy that has been applied here for years,” said Aref Daraghmeh, a Jordan Valley-based researcher with Israeli human rights NGO B’Tselem. These tactics predate Israel’s mooted plans to annex parts of Area C, he added.

At the same time, Daraghmeh noted, Israeli settlers have been increasingly active in the area, appropriating land by fencing it off and establishing three new outposts.

Israeli demolitions in the West Bank and East Jerusalem are at a four-year high, according to UN data — despite the COVID-19 outbreak. Israel has demolished almost 690 structures in the West Bank so far this year, displacing around 870 Palestinians; 46 of those demolitions took place last month. Also in October, within the Green Line, Israel demolished the Bedouin village Al-Araqib in the Naqab/Negev for the 179th time.

On Wednesday, the Palestinian Authority’s Colonization and Wall Resistance Commission delivered tents to Humsa al-Fuqa residents, and called on international organizations to provide immediate assistance in order to fight“mass demolition and ethnic cleansing.”

The Commission also announced that a further three Jordan Valley had received evacuation notices on Wednesday morning, ahead of Israeli army training next week.

In response to an inquiry from +972 Magazine, inquiry, the Civil Administration, Israel’s military government in the West Bank, stated that it had “carried out law enforcement activities against structures established illegally in a firing zone in the Jordan Valley.”

Ahmad Al-Bazz is a journalist and documentary filmmaker based in the West Bank city of Nablus. He has been a member of the Activestills photography collective since 2012.

Oren Ziv is a photojournalist, a founding member of the Activestills photography collective, and a staff writer for Local Call.