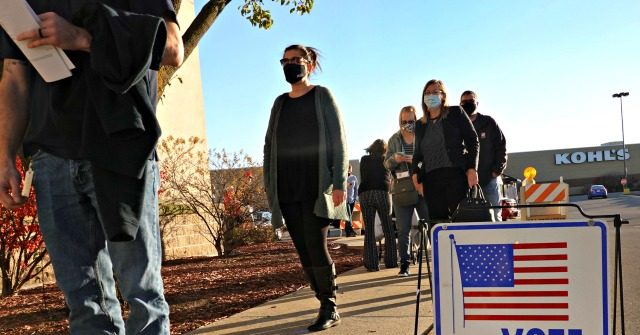 Wisconsin’s voter turnout, with 98 percent of precincts reporting, indicates that nearly 9-in-10 registered voters cast ballots in the 2020 presidential election.

While Democrat presidential candidate Joe Biden leads President Trump in Wisconsin by about 20,510 votes, voter turnout across the state is at a nearly unprecedented level, according to calculations.

With almost all the votes tallied, more than 89 percent of all 3,684,726 registered voters in the state of Wisconsin apparently voted in the election. So far, 3,297,137 votes have been tallied in Wisconsin.

Such a turnout would be a more than 46 percent increase compared to turnout 32 years ago in 1988, when turnout hovered around 61 percent. Likewise, the turnout would shatter the 2004 turnout tota, when more than 73 percent of Wisconsin voters cast ballots.

Below is a breakdown of voter turnout in Wisconsin dating back to the 1988 election:

Wisconsin is one of many states that allows eligible voters to register to vote on the day of the election so long as they provide proof of residency documents and a photo ID.

The Wall Street Journal’s Kimberly Strassel questioned the Wisconsin turnout in a series of posts:

2) The Milwaukee Journal Sentinel is claiming a 71% state turnout. I’m not sure where it gets this, but that would make more sense, given even populous Milwaukee didn’t exceed 83% turnout, and Dane lower. (Do math on what rest of state wud need to bump up state avg to 89)

4) Is that possible/conceivable? That would be akin to increasing WI’s registered voting population by up to 30%–in one day. It would also suggest that if those same-day registrations hadn’t happened, WI would have had a ridiculously LOW turnout.

6)Surely a record/tally of those same-day registrations must exist. It would therefore seem a straightforward proposition to set the numbers/record straight?
Again, explain if I’m missing something. @WI_Elections

8) I think high voter turnout is great, and if WI truly did this, wow. I only question it because it is so strikingly at odds with any other state.