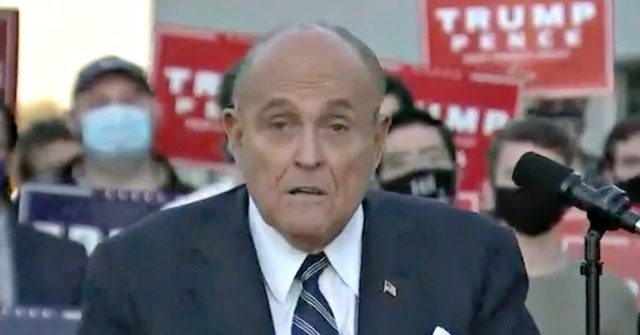 Former New York Mayor Rudy Giuliani launched a major effort to challenge what he described as “highly suspect” mail-in ballots that were counted in Philadelphia without proper observation.

“This is a concerted effort of the crooks that run the Democrat party,” he said during a press conference on Wednesday.

Giuliani said that the “Democrat crooked machine” prevented Republican observers in Philadelphia from seeing the ballot counting process, forcing them to stand 20 or 30 feet away.

The former mayor announced that President Donald Trump’s campaign had filed a lawsuit to contest the counting process.

“We were supposed to be allowed by law to observe the counting of the ballots,” Giuliani said, citing the importance of Trump campaign observers at the polling stations in Philadelphia.

Former Florida Attorney General Pam Bondi said that the integrity of the election was in jeopardy after one worker demanded that Trump election observers be kept 30 feet away from the counting process, with police barricades, while the counting took place.

“We need to fix this, we need to remedy this now because we’ve won Pennsylvania and we want every vote to be counted in a fair way,” Bondi said.

She said that the Trump campaign would release a video of the incident.

Giuliani said that 120,000 ballots were counted in Philadelphia that were not observed by Election Day workers.

“We never got a chance to look at a single one of them,” he said.

Giuliani said that the unobserved counting of the 120,000 should be contested, which is why the team filed a lawsuit.

Giuliani said that Philadelphia had a reputation for voter fraud, dead people voting, and people bussed in from Camden, New Jersey, to vote in Pennsylvania. But the new aspects of mail-in ballots, he alleged, allowed Democrats to deliver an unprecedented new level of voter fraud.

Giuliani also contested the 120,000 ballots that suddenly appeared in Wisconsin at 4:00 a.m., as well as Arizona, Nevada, and Michigan.

He previewed a possible national lawsuit to challenge the Democrats for their sudden ballot deliveries.

The former New York City mayor described the effort as an illustration of the president’s willingness to fight for his supporters and their votes.

“Do you think we’re stupid? You think we are fools?” he asked. “Do you know something? The Democrats do think you’re stupid, they do think your fools, and that’s why you get called deplorable and chumps. That’s over.”