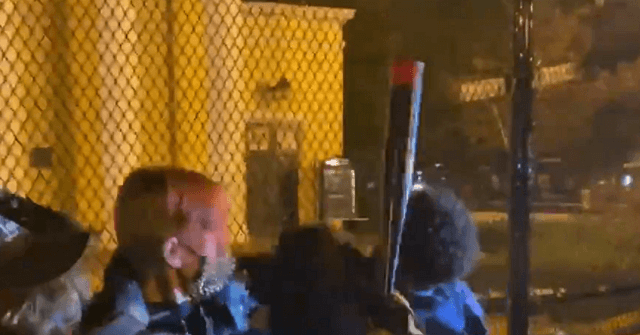 A fight broke out in Black Lives Matter Plaza near the White House in Washington, D.C. late Tuesday night.

Video captured a fight breaking out when a man wearing all black began fighting with another white man. The video shows multiple people joining in and assaulting the man before he manages to escape.

One person struck the make with some type of bat, the video shows.

“Where you going?” someone asked the man just as the fight breaks out. Another man tried to separate the two men until the first blow was struck.

The fight quickly broke up before any serious injury occurred. “Let him go,” someone yelled as he ran away.

Tense moment in BLM Plaza, near the White House, after DC Police make an arrest. pic.twitter.com/FezW82D9rj

Another protester accosted what he believed to be a Black police officer, calling him an “Uncle Tom,” among other slurs.