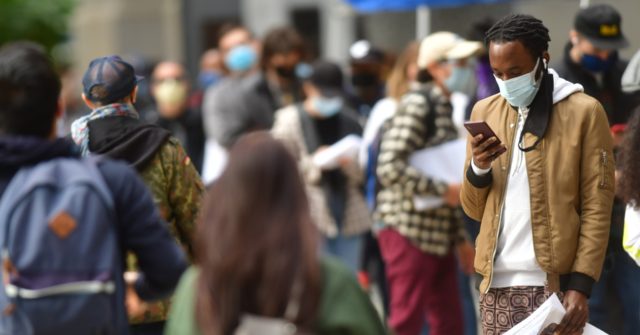 According to Trump 2020 EDO director Mike Roman, Democrat election officials are banning Trump poll watchers all across the city, as one video shows. Another photo on social media shows a physical barrier, which Roman says Democrat officials are using to keep poll watchers far from the counting tables:

🚨DEMOCRAT ELECTION OFFICIALS BANNING TRUMP POLL WATCHERS IN PHILLY. This is happening all over the City. The steal is on! https://t.co/sWS9lXL5vh

It makes clear that it allows the holder to watch at any polling place in the city pic.twitter.com/0lRgIFekKg

North Philadelphia: poll watcher DENIED entry. DEMOCRAT committee person seems to be running election board. Will not allow watcher in, said she is calling her ward leader — who has NO official standing. #StopTheSteal

Polls have been open for an hour and voters are STILL locked out of the polling place at Welsh Road Library. Why don’t they want people to vote?

There also appear to be instances of illegal campaigning at various polling locations. Roman provided an image of a man in blue purportedly distributing Democrat literature to voters as they stand in line to cast their ballots. Other polling locations appear to have the literature posted outside the facility:

ILLEGAL campaigning INSIDE of a polling location in Philly. Man in blue is handing out DEM literature to voters IN LINE TO VOTE. This is why DEMS are keeping TRUMP WATCHERS OUT. They are STEALING it! This needs to STOP! pic.twitter.com/qnJ3D8o2ie

Spotted at the Olney Recreation Center:

And its widespread. I checked the other polling places in our ward on the way home. pic.twitter.com/3CkkaF8Mza

Guess someone forgot their headphones: this speaker is blasting anti-Trump music in earshot of people waiting to vote! #FreeAndFairElections pic.twitter.com/hYVlpl7QXO

Additionally, there are mounting reports of polling locations opening late, forcing some voters to step out of line to return to work before casting their ballots:

🚨At least THREE polling places are reportedly not yet open — two in Philadelphia, one in Allegheny! Polls should have opened at 7:00! @PhillyVotes

What a coincidence. My friend, in the Republican part of Pennsylvania just called me. They are standing in line at the polling place that was supposed to open and is still not open. People leaving because they have to go to work. This is the BS we have been warning about.

According to the Philadelphia Republican Party, in the first two hours of voting alone, they have received reports of “several reporting locations closed,” hundreds of voters stuck in line, ballot harvesting, and officials denying poll watchers access.

There are also reports of voting machines down in Westmoreland and Philadelphia Counties, according to the Philly GOP:

Polls have been open for 2 hours in PA. Here’s what we’ve seen:

But sure, Republicans are the party trying to meddle in elections ¯_(ツ)_/¯

REPORT: Voting machines down in Westmoreland and Philadelphia Counties. Opposite sides of the state, both pro-Trump strongholds. #PAForTrump

All eyes remain on Pennsylvania, the state many believe could determine the outcome of the election. Pennsylvania Attorney General Josh Shapiro (D) made waves over the weekend after declaring — three days before the election — that “if all the votes are added up in PA, Trump is going to lose.”

If all the votes are added up in PA, Trump is going to lose. That’s why he’s working overtime to subtract as many votes as possible from this process.

For the record, he’s 0-6 against us in court. We’ve protected voting rights. Now, ignore the noise—vote!https://t.co/mN8t6TDud7

Pennsylvania polls close at 8 p.m., with 20 electoral votes up for grabs.

25 killed by Black Lies Matter and media said nothing…

Why Does The IRS Harass Taxpayers Who Already Paid Their Taxes?