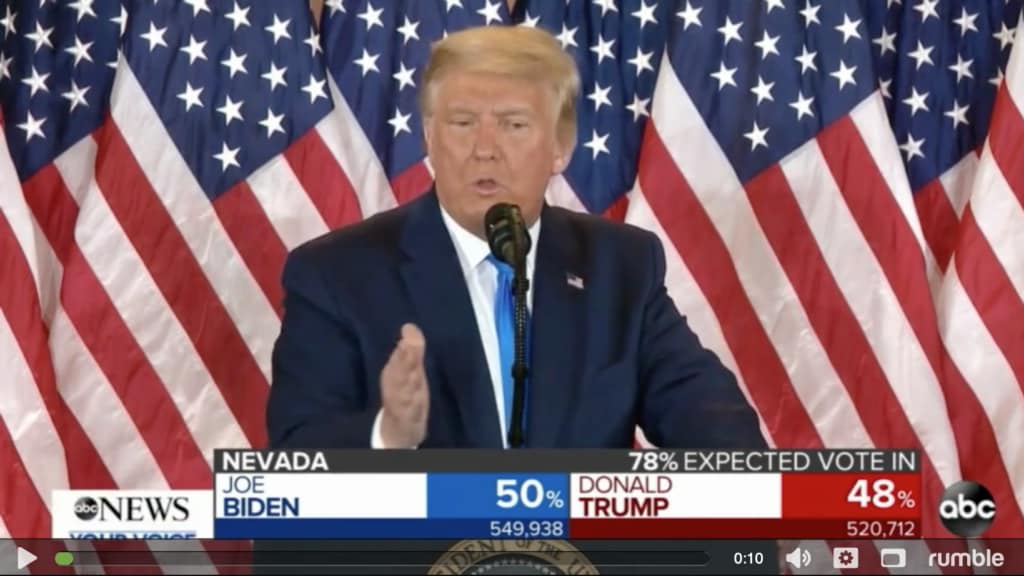 This story is developing, please return to SaraACarter.com for updates.

President Donald Trump rallied supporters in the darkness of an early morning victory speech from the White House, saying he captured the votes of key multiple battleground states on Wednesday and has won the election.

The early call by the President was criticized by opponents and as it stands the winner of the election remains unclear, while Pennsylvania, Georgia, North Carolina, Michigan, Wisconsin, Nevada and Alaska are still tallying the ballots.

But the breakdown in electoral votes and the numbers counted, thus far, appear to lean heavily in President Trump’s favor. Still, concern in his campaign is mounting over Pennsylvania’s unconventional and days long vote count. Numerous claims that fraud is likely to take place in Pennsylvania have been mulled by members of Trump’s campaign in the weeks leading up to the election and the actions by the court to allow Pennsylvania to extend its ballot count until the end of the week were criticized by Trump and his team. To prepare for that the campaign is ready to fight any suspicion of fraud with its armada of lawyers, who have been dispatched throughout the nation.

In the early morning hours at the White House, Trump said during his speech that if necessary he would push the Supreme Court to give a ruling over the disputed ballots.

He warned that the Democrats and former Vice President Joe Biden’s campaign were willing to do anything to take the election saying they are a “very sad group of people” that are trying to disenfranchise voters. The President warned that “We want all voting to stop. We don’t want them to find any ballots at 4 o’clock in the morning and add them to the list, okay.”

He’s right. It’s illegal and they can’t just randomly count votes that may have been collected after the polls closed.