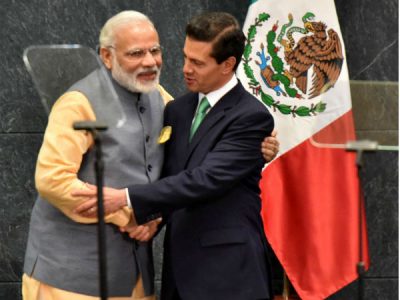 Relations between Mexico and India are taking a new turn. Recently, in a bilateral remote meeting between the respective foreign ministers, the governments of both countries agreed to promote a new “vision of the future”, focusing on social development and economic recovery in the face of the crisis generated by the pandemic of the new coronavirus.

At the virtual meeting that took place in late October, the diplomatic delegations of Mexico and India agreed to create a series of joint strategies with the aim of elevating the already developed bilateral partnership to a new stage of international cooperation, which specifically aims to recover both economies for the post-pandemic world. This was the eighth virtual meeting of the India-Mexico Bilateral High-Level Group (BHLG), a team formed by representatives of both countries that manages relations between Mexico and India since the beginning of the pandemic, and was attended by several government officials and private institutions, as well as development agencies.

It is important to clarify that these new ideas did not appear suddenly but are the natural result of a long process of economic approximation. Mexico is currently India’s main trading partner in the entire Latin America, with about a quarter of the Asian country’s relations with this region. Mexico imports products such as software, vehicles, electrical machinery, textiles and jewelry from India, while India imports oil, chemicals, fertilizers, iron and steel from Mexico. Several companies from both countries operate and invest in each other, with emphasis on more than 170 Indian companies on Mexican soil. In three years (from 2016 to 2019) trade between India and Mexico has almost doubled, having reached the amount of 10 billion dollars – which does not represent an exceptionally large amount, but indicates a great increase.

However, what most interests the investors and has drawn the attention of analysts are not the current figures, but the possibilities for cooperation. So far, little has been said by the foreign ministers of both countries and by the companies involved in the BHLG meetings about what types of investments and projects are being planned, but the large amount of remote meetings in a short time has generated strong expectations. Despite the distance, the potential for economic cooperation between these countries is immense. Both countries have remarkably similar general conditions, with common geo-climatic factors and a high availability of human material. At a previous meeting, for example, the delegations of both countries announced a goal of increasing the exchange of agri-food products between their respective markets, which will certainly be provided by geo-climatic factors. In addition, India has a particularly advanced degree of technology, being a world leader in the consumption of mobile networks and relying on a strong highly qualified material and human apparatus in the technological sector. The possibilities for cooperation are truly immeasurable and would supply some of the greatest needs of both nations.

In fact, the BHLG has requested a quick conclusion of the negotiations and is entering into a new bilateral agreement to be announced, with a series of reciprocal investments. The main strategy adopted has been the mediation by diplomatic sectors of direct contact between the private sectors of both countries, which facilitates negotiations. It is already known that in addition to the agri-food sector, investments in the space and educational sectors will be strengthened, with joint projects between Indian and Mexican space agencies and with international school collaboration – which indicates that the cooperation goes beyond mere economic development.

However, there is one factor that needs to be considered when we analyze this data, which is the new trade agreement between Mexico, US and Canada, the USMCA. The agreement profoundly destabilized some of Mexico’s main strategic partnerships since the Latin country was forced to relinquish several cooperation projects with China previously maintained in numerous sectors. In fact, the agreement forced Mexico to take a stand in the global context of US-China trade war, prioritizing trade with its neighboring country over Washington’s geopolitical rivals. Now, the partnership with India looks like a beneficial outlet for Mexico.

India is an Asian ally of the US and a regional rival of China. On the other hand, it is a developing country that has some similarities with China: remarkable technological progress, great availability of qualified human material and recent economic growth. At the same time, some factors are damaging the Indian scenario: high levels of poverty and enormous social inequality aggravated by the pandemic, which continues to be severe in the country, despite the fall in the last month. In short, India has some favorable conditions for it to become a “substitute” for China in many of the cooperation that Mexico had with Beijing before the USMCA. Still, being a country that is economically much inferior to China, projects of common benefit and reciprocal development can be even more interesting for both. But what will be the American reaction to that?

Certainly, any partnership between Mexico and India is a secondary issue during the election period, but choosing the new American president, this will be one of the most discussed topics. Will Washington allow India to establish stronger ties with a country in its zone of influence? Certainly not. Washington, however, will try to undermine such cooperation by imposing sanctions only against Mexico, maintaining neutrality in relation to India due to the country’s importance to American interests in Asia.

In any case, the scenario is far from “perfection” and many tensions will come along with the promising international cooperation projects.