A forensic psychiatrist, and former guest and health expert on both CNN and MSNBC, praised Adolf Hitler in an attempt to criticize President Donald Trump, and compared the Holocaust to Trump’s handling of the pandemic.

Dr. Bandy X Lee, an outspoken critic of Trump, tweeted her shocking comparison just one day before the election, crediting Hitler with better character than Trump.

“Donald Trump is not an Adolf Hitler. At least Hitler improved the daily life of his followers, had discipline, and required more of himself to gain the respect of his followers,” she wrote. “Even with the same pathology, there are varying degrees of competence.”

She also claimed that the pandemic death toll in the U.S “is higher than Hitler’s at the same period.”

Lee has publicly stated that she believes Trump is in mental decline and is oftten cited in conversations about Trump’s removal based on the 25th Amendment. She edited “The Dangerous Case of Donald Trump: 27 Psychiatrists and Mental Health Experts Assess a President,” a book attempting to evaluate what exactly is “wrong” with Trump.

Shortly after she tweeted the bizarre comparison, Lee removed her post. But instead of apologizing for her insensitive comments, Lee tweeted a long explanation attempting to justify them.

“Okay, I have taken it down, since it has upset so many people and was not provoking thought but the opposite. Of note, my statement was about how little Donald Trump believes he needs to do to retain his followership, NOT to minimize Adolf Hitler’s atrocities,” she wrote.

“If we cannot look at parallels in history and learn from them, we are truly poised to repeat it. I say so in heartbreak for the 11+ million lives lost, not in their minimization (currently, we are looking at 7 billion at risk, without exaggeration if we soberly thought of it),” she added, claiming that most of her followers understood her point. 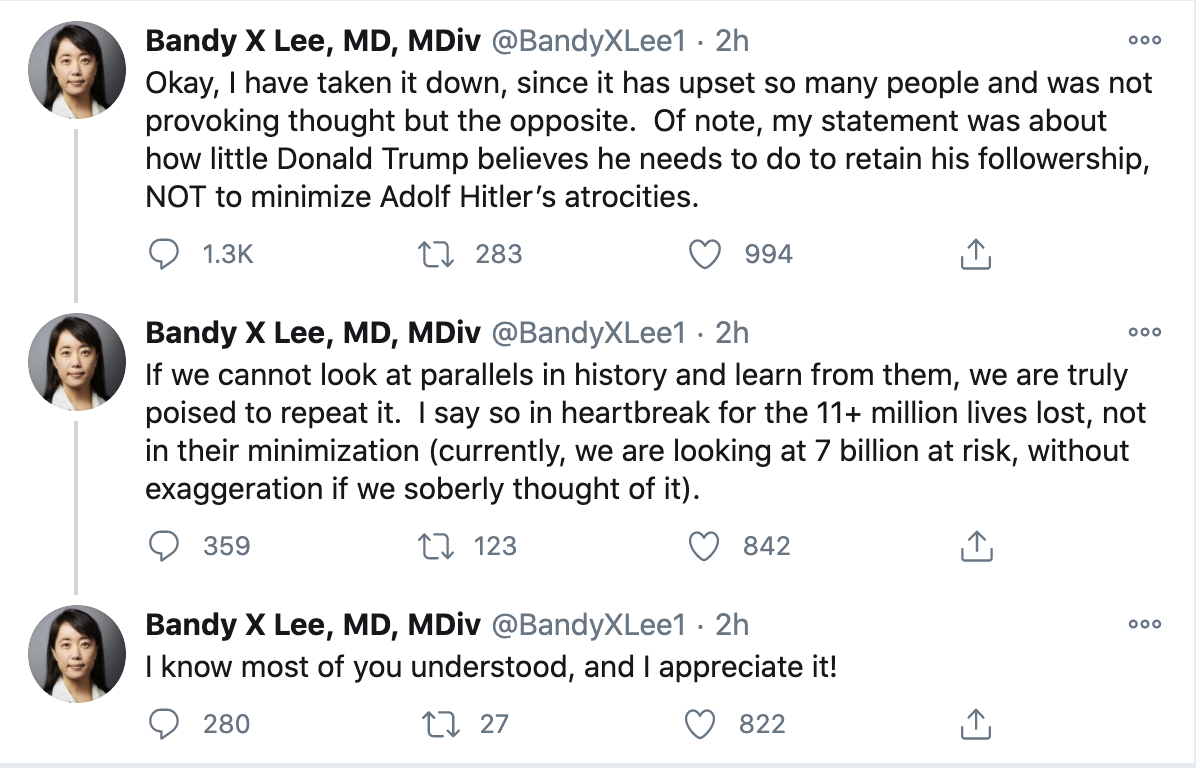 Lee also tried to shift the narrative to linking white supremacists and neo-Nazis to Trump and echoing the Democrat and mainstream media’s cries that COVID-19, an uncontrollable virus, is somehow Trump’s fault.

“It is at least heartening to know there is uniform denouncing of Hitler,” she wrote. “Since I specialize in treating violent offenders, I know Neo-Nazis and white supremacists never went away (they have been my patient base for 20 years!). Similar personalities usually attract one another.”

“I look forward to the day when an aversion to comparison does not prevent us from recognizing genocide happening before us,” she added. “On Friday, there were 100,000 new cases in a single day. Many will experience torture, long-lasting debility, and death. And overwhelmingly minority.”

Greenwald — The domestic war on terror is coming…