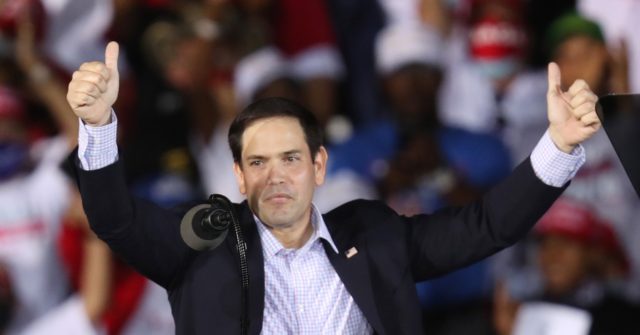 Sen. Marco Rubio (R-FL) delivered a rousing address to tens of thousands of Trump supporters on Sunday night at an airport rally for the president in Opa-Locka, Florida.

Rubio, once a fierce rival for the Republican nomination in 2016, pumped up the crowd for Trump, stressing a common American identity.

“I don’t know what they’re gonna write about tomorrow, I don’t know what news is gonna say tonight, but I know the truth. This president has united tonight, in one place, at one time, people united by one thing: they are proud Americans!”

Turning to Trump’s rival, Democratic nominee Joe Biden, Rubio joked that it was 10:30 p.m., well past Biden’s bedtime: “Shh! Don’t wake him up.”

Rubio then turned to fellow immigrant families who left socialist or communist countries.

One of the things that unites so many of the people here, where you have come to this country because you lost your native land, and you lost it to something called socialism.

He mocked Obama and Biden’s foreign policy on Iran, noting that Trump had taken out terrorist General Qasem Soleimani, and ISIS leader Abu Baker al-Baghdadi, rather than waiting for the consensus of allies to act.

He also praised Trump’s performance on coronavirus, noting that the U.S. was now exporting ventilators, and that Trump had led an effort to develop vaccines. He also praised Trump for being the first president in a quarter century to stand up to China.

“We will never be a socialist country.”