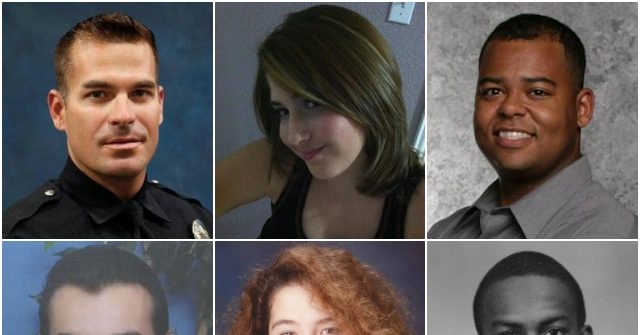 Angel Families are thanking President Donald Trump for recognizing November 1 as a national day of remembrance for American citizens killed by illegal aliens.

On Sunday, Angel Families are honoring their loved ones who lost their lives as a result of illegal immigration. In Phoenix, Arizona, a candlelight vigil is being held for Americans killed by illegal aliens.

Days ago, Trump declared November 1 the “National Day of Remembrance for Americans Killed by Illegal Aliens.” Angel Families told Breitbart News that Trump, unlike other presidents, has been a loyal supporter of theirs.

Angel Dad Chris Odette thanked Trump in a post. Odette’s 13-year-old daughter Chrishia was killed by an illegal alien in 2014.

“President Trump has been the only president to hear the plight of what we endure, the agony of our pain that was widely ignored by his predecessors,” Angel Mom Kiyan Michael said. Michael’s son, Brandon Randolph Michael was killed by an illegal alien in Florida in 2007.

“We know our son Brandon’s death, as well as all deaths at the hands of illegal aliens and illegal activity, are 100 percent preventable if our laws simply had been enforced, borders secured, and attention given to strengthen or remove the loopholes in policies that were ineffective,” Michael continued:

As a family, we are grateful for our President’s proclamation and sincerely thank him for acknowledging real American tragedies by honoring our son, Brandon Randolph Michael’s life, memory and legacy as well as the countless other angel families around the US.

Angel Mom Agness Gibboney, whose 29-year-old son Ronald Da Silva was killed by an illegal alien in 2002 in California, said she loves Trump because he is the only president that has taken on the issue of illegal immigration and its human cost.

“President Trump is the only one who cares about our losses, our loved ones who were killed by illegal aliens,” Gibboney said. “That is why I love and respect President Trump; he’s kind and compassionate.”

Likewise, Angel Mom Vicki Lyon, whose daughter Nikki was killed by an illegal alien in 2001, thanked Trump for “never forgetting our children and loved ones.”

Maria Espinoza, head of the Remembrance Project, has been advocating for a national day to remember the American lives lost at the hands of illegal aliens for over a decade. In November 2018, she wrote a formal plea to Trump asking that he recognize Americans killed by illegal aliens with a specific day of remembrance.

The Remembrance Project, in its 11th year, has recognized this day of remembrance for nearly a decade,” Espinoza said in a statement. “This President has been a loyal friend of the Remembrance Project and its families since 2015 when we first met and brought him irrefutable proof of the epidemic of killings of Americans by those who should have never been in our country to commit these heinous crimes.”

“Through his embracing our ‘Stolen Lives Quilt’ and by allowing our Angel Moms, Dads, and Families to bravely tell their stories at rallies in front of millions of stunned and sympathetic Americans, I am reminded of President Trump’s 2016 promise to our families of loved ones killed by illegal aliens that ‘Your loved ones will never be forgotten,’” Espinoza continued. “Since then, President Trump has worked hard to secure our border, enforce deportations, and today, he kept one more promise.”

Angel Mom Sabine Durden, whose 30-year-old son Dominic was killed by an illegal alien in 2012 in California, posted a tribute to her son and thanked Trump for his recognition.

🙏🏽THIS DAY is dedicated to my son Dominic & ALL victims of illegal alien crime thanks 2 @realDonaldTrump Proclamation/National Day of Remembrance 4 Americans killed by Illegal Aliens 💔Please light a candle & say a prayer 4 all the families who hurt so much #domhugs pic.twitter.com/rtP1bc50ss

China’s Message to Donald: What Do You Want from Us?

This really pisses me off…