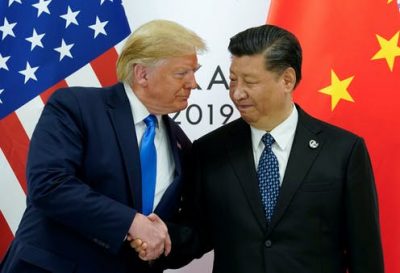 In an explosive scoop [1], alternative news outlet Zero Hedge has laid bare how China’s state apparatchik clandestinely baited the family members of the Obama-era vice president and secretary of state into joint business ventures in order to surreptitiously influence the trade and economic policies of the US government favoring China’s geo-economic interests spanning the globe.

Here are a few relevant excerpts from the investigative report authored by Christopher Balding, Associate Professor at Peking University HSBC School of Business Shenzhen, China, and also a Bloomberg contributor:

“Hunter Biden partnered with the Chinese state. Entire investment partnership is Chinese state money from social security fund to China Development Bank. It is actually a subsidiary of the Bank of China. This is not remotely anything less than a Chinese state-funded play.

“Though the entire size of the fund cannot be reconstructed, the Taiwanese cofounder who is now detained in China, reports it to be NOT $1-1.5 billion but $6.5 billion. This would make Hunters stake worth at a minimum at least $50 million if he was to sell it.

“The believed Godfather arranging Hunter’s business ventures is a gentleman named Yang Jiechi. He is currently the CCP Director of Foreign Affairs leading strategist for America, Politburo member, one of the most powerful men in China, and Chinese President Xi Jingpin’s confidant.

“He met regularly with Joe Biden during his stint as Chinese ambassador the US when Biden chaired the Senate Foreign Relations Committee.  Later he was Minister of Foreign Affairs when the investment partnership was made official in 2013.

“Hunter Biden’s 2013 Bohai Harvest Rosemont investment partnership was set-up by Ministry of Foreign Affairs institutions which are tasked with garnering influence with foreign leaders during Yang’s tenure as Foreign Minister.

“Hunter’s BHR stake (purchased for $400,000) is now likely be worth approx. $50 million (fees and capital appreciation based on BHR’s $6.5 billion AUM as stated by Michael Lin).

China is known to follow the economic model of “state capitalism,” in which although small and medium enterprises are permitted to operate freely by common citizens, large industrial and extraction companies, especially multi-billion dollar corporations doing business with foreign clients, are run by the Communist Party stalwarts masquerading as business executives.

In addition, China is alleged to practice “debt-trap diplomacy” for buying entire governments through extending financial grants and loans, and what better way to buy the rival government of the United States than by financing the Biden campaign through bestowing financial largesse on the Biden and John Kerry families and other prominent former officials of the Obama-Biden administration.

In an exclusive report [2] for the Breitbart News on October 16, Peter Schweizer and Seamus Bruner allege that newly obtained emails from a former business associate of Hunter Biden’s inner-circle reveal that Hunter and his colleagues used their access to the Obama-Biden administration to peddle influence to potential Chinese clients and investors—including securing a private, off-the-books meeting with the former vice president.

The never-before-revealed emails, unconnected to the Hunter Biden emails being released by the New York Post, were provided to Schweizer by Bevan Cooney, a one-time Hunter Biden and Devon Archer business associate. Cooney is currently in prison serving a sentence for his involvement in a 2016 bond fraud investment scheme.

“On November 5, 2011, one of Archer’s business contacts forwarded him an email teasing an opportunity to gain ‘potentially outstanding new clients’ by helping to arrange White House meetings for a group of Chinese executives and government officials.

“The group was the China Entrepreneur Club (CEC) and the delegation included Chinese billionaires, Chinese Communist Party loyalists, and at least one ‘respected diplomat’ from Beijing. Despite its benign name, CEC has been called ‘a second foreign ministry’ for the People’s Republic of China—a communist government that closely controls most businesses in its country. CEC was established in 2006 by a group of businessmen and Chinese government diplomats.

“‘I know it is political season and people are hesitant but a group like this does not come along every day,’ an intermediary named Mohamed A. Khashoggi wrote on behalf of the CEC to an associate of Hunter Biden and Devon Archer. ‘A tour of the white house and a meeting with a member of the chief of staff’s office and John Kerry would be great.’

“The gross income of the CEC members’ companies allegedly ‘totaled more than renminbi 1.5 trillion, together accounting for roughly 4% of China’s GDP.’ The overture to Hunter Biden’s associates described the Chinese CEC members variously as ‘industrial elites,’ ‘highly influential,’ and among ‘the most important private sector individuals in China today,’ dubbed as the China Inc.

“The visitor logs list Jeff Zients, the deputy director of Obama’s Office of Management and Budget (OMB), as the host of the CEC delegation. Obama had tasked Zients with restructuring and ultimately consolidating the various export-import agencies under the Commerce Department—an effort in which the Chinese delegation would have a keen interest.”

Schweizer suggests that the meeting may have opened the door for Hunter and Devon Archer down the road—as just two years later they formed the Chinese government-funded Bohai Harvest RST (BHR) investment fund which saw Chinese money pour into it for investments in CEC-linked businesses.

According to the report,

“One of BHR’s first major portfolio investments was a ride-sharing company like Uber called Didi Dache—now called Didi Chuxing Technology Co. That company is closely connected to Liu Chuanzhi, the chairman of the China Entrepreneur Club (CEC) and the founder of Legend Holdings—the parent company of Lenovo, one of the world’s largest computer companies. Liu is a former Chinese Communist Party delegate and was a leader of the 2011 CEC delegation to the White House. His daughter was the President of Didi.”

After reading the names of these high-profile Chinese business and political elites visiting the White House and cultivating personal friendships and business relationships in the highest echelons of the Obama-Biden administration, one wonders whether the latter formulated trade and economic policies serving the interests of the American masses or took care of financial stakes of global power elites.

During the last decade, all the manufacturing has outsourced to China, Chinese entrepreneurs are stealing American jobs and the American working classes are finding it hard to make ends meet, yet neoliberal Democrats are dogmatically sticking with market fundamentalism of globalization and free trade.

In order to understand the real and perceived grievances of Donald Trump’s “alt-right” electoral base, we need to understand the prevailing global economic order and its prognosis. The predictions of pragmatic economists about free market capitalism have turned out to be true. A kind of global economic entropy has set into motion, and money is flowing from the area of high monetary density to the area of low monetary density.

The rise of BRICS countries in the 21st century is the proof of this tendency. BRICS are growing economically because the labor in developing economies is cheap; labor laws and rights are virtually nonexistent; expenses on creating a safe and healthy work environment are minimal; regulatory framework is lax; expenses on environmental protection are negligible; taxes are low; and, in the nutshell, windfalls for multinational corporations are massive.

Thus, BRICS are threatening the global economic monopoly of the Western capitalist bloc: North America and Western Europe. Here we need to understand the difference between manufacturing sector and services sector. Manufacturing sector is the backbone of economy; one cannot create a manufacturing base overnight.

It is based on hard assets: the national economies need raw materials; production equipment; transport and power infrastructure; and, last but not the least, a technically educated labor force. It takes decades to build and sustain a manufacturing base. But the services sector, like the Western financial institutions, can be built and dismantled in a relatively short period of time.

If we take a cursory look at the economy of the Western capitalist bloc, it has still retained some of its high-tech manufacturing base, but it is losing fast to the cheaper and equally robust manufacturing base of the developing BRICS nations. Everything is made in China these days, except for high-tech microprocessors, software, several internet giants, some pharmaceutical products, the Big Oil and the military hardware and defense production industry.

Apart from that, the entire economy of the Western capitalist bloc is based on financial institutions: the behemoth investment banks that dominate and control the global economy, like JP Morgan Chase, Citigroup, Bank of America, Wells Fargo and Goldman Sachs in the US; BNP Paribas and Axa Group in France; Deutsche Bank and Allianz Group in Germany; and Barclays and HSBC in the UK.

After establishing the fact that the Western economy is mostly based on its financial services sector, we need to understand its implications. Like I have contended earlier that it takes time to build a manufacturing base, but it is relatively easy to build and dismantle an economy based on financial services.

Moreover, the manufacturing sector is labor-intensive whereas the financial services sector is capital-intensive, therefore the latter does not create as much job opportunities to keep the workforce of a nation gainfully employed and sufficiently remunerated as the industrial sector does.

Although the bankers and corporate executives of the Western economies are the beneficiaries of such exploitative practices, the middle and working classes are suffering. Besides the Trump supporters in the United States, the far-right populist leaders in Europe are also exploiting popular resentment against free trade and globalization.

The Brexiteers in the United Kingdom, the Yellow Vest protesters in France and the far-right movements in Germany and across Europe are a manifestation of a paradigm shift in the global economic order in which nationalist and protectionist slogans have replaced the free trade and globalization mantra of the nineties.

Though the “alt-right agenda” of the Trump presidency has been scuttled by the political establishment and the deep state, Trump’s views regarding global politics and economics are starkly different from the establishment Democrats and Republicans pursuing neoliberal economics masqueraded as globalization and free trade.

With his anti-globalist and protectionist agenda, Trump represents a paradigm shift in the global economic order. Trump withdrawing the United States from multilateral treaties, restructuring trade agreements, bringing investments and employments back to the US and initiating a trade war against China are a silent revolution against neoliberal ideals of globalization and free trade of which China is the new beneficiary with its strong manufacturing base and massive export potential.

Thus, it’s only natural for the Chinese government to try to oust Trump from the presidency with all available means, including providing financial support to his neoliberal Democratic rivals, favoring globalization and free trade, in the upcoming US presidential elections slated for November 3.

[1] Blockbuster Report Reveals How Biden Family Was Compromised By China: