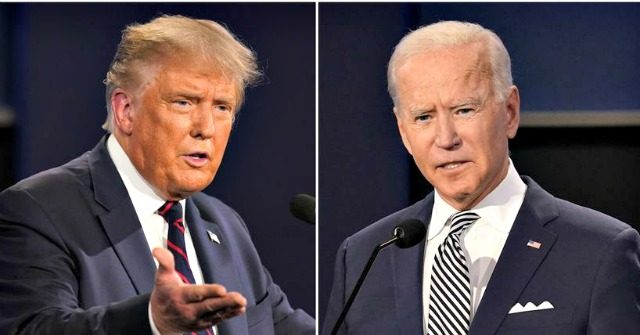 President Donald Trump is leading former Vice President Joe Biden in the battleground state of Iowa in the final stretch of the 2020 presidential election, shows a newly-released survey.

The Des Moines Register/Mediacom Iowa Poll found President Trump is beating Biden 48% to 41% — a lead of seven percentage points. Three percent said they will cast their vote for someone other than the president or the Democrat nominee, while two percent said they were unsure. Five percent would not disclose their choice.

The poll’s September numbers found President Trump and Biden tied at 47 percent each, illustrating how far the former vice president’s support has dropped in recent weeks. The poll, conducted by Selzer & Co. of Des Moines, is comprised of 814 likely Iowa voters between October 26 and 29, and possesses a margin of error of plus or minus 3.4 percentage points.

J. Ann Selzer, president of Selzer & Co., said while men are more likely to support Trump and women to support Biden, the gender gap has narrowed, and independents have returned to supporting the president, a group he won in 2016.

“The president is holding demographic groups that he won in Iowa four years ago, and that would give someone a certain level of comfort with their standing,” Selzer told the Des Moines Register. “There’s a consistent story in 2020 to what happened in 2016.”

President Trump will hold a campaign rally in Dubuque Sunday at 1:00 p.m. local time. It will be the the president’s second trip to the state this month. Vice President Mike Pence held a rally in Des Moines on October 29.