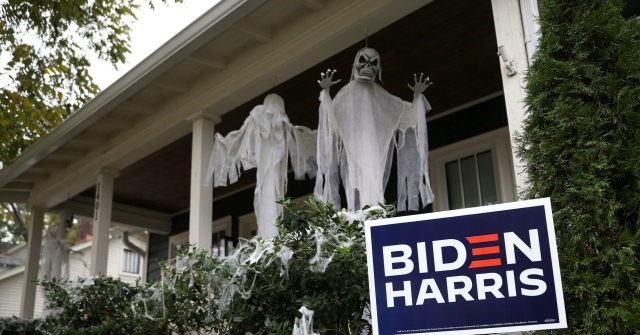 House Republican Leader Kevin McCarthy (R-CA) told Breitbart News Saturday host Matthew Boyle on Halloween that the “scariest thing” he can think of is a Joe Biden presidency, which would include sanctuary cities, unsafe communities, and sky-high taxes.

McCarthy said the way to win in November would be “for every listener, every person, to go out and vote.” He added, “And don’t go by yourself. Take somebody with you. I don’t care what the polls say or what the elite media is out there saying. The number I’m looking at–I just looked at today–we are closer in every state by absentee votes than we were with Hillary Clinton right now,” McCarthy said.

McCarthy stated that “if you want to take that gavel away from [House Speaker] Nancy Pelosi (D-CA),” you should go out and vote.

However, he warned that Biden would enact leftist policies that would harm Americans’ way of life.

“Today is Halloween, but the scariest thing I can think of is a Biden presidency. We cannot allow that to happen or allow Nancy Pelosi to hold the gavel any longer,” McCarthy charged.

McCarthy noted that Biden and other Democrats would enact policies to eliminate the oil and natural gas industry, eliminate Americans’ private health insurance through a public option, and raise taxes.

“It’s extremely scary. Just think about what they want to do to the energy industry, the fracking industry. That means jobs. That means a large percentage of jobs in America are gone.”

The House GOP leader said Biden would also scrap successful policies, such as the Tax Cuts and Jobs Act.

“When they talk about raising your taxes on those who make over $400,000 or higher, they are lying to you. When we doubled the standard deduction, everybody got a tax cut,” he added. “They want to take that away.”

McCarthy also said Biden does not have the “backbone” to stand up to progressives who would influence him as president — Sen. Bernie Sanders (I-VT) and Rep. Alexandria Ocasio-Cortez (D-NY), for example. The California conservative said Biden had accepted the Green New Deal as a “crucial framework” to combat alleged climate change.

McCarthy hopes to oust Pelosi as House speaker next week. Republicans remain poised to take back the House, as they only need to gain a net 17 seats to retake the House majority. McCarthy and congressional Republicans have targeted 30 congressional districts that Trump won in 2016 but House Democrats currently hold. Of those 30 districts, Trump won 13 by more than six percent.

McCarthy said they could take back the House by fielding great candidates across the nation.

“We’ve got an opportunity from Oregon to Florida to Maine to New Hampshire. That is the way we’re able to take back the gavel from Nancy Pelosi,” he said.

He stated that with a Trump win and Republican victories next week, they can “end socialism in America once and for all.”

McCarthy asserted that many Americans have “fear” that Biden, Sen. Kamala Harris (D-CA), and Pelosi would enact “San Francisco policies for the entire nation.” He charged, “You will have sanctuary cities. You will have sidewalks that nobody will want to walk down. You will have sky-high taxes.”