Chopper pressers are the best pressers.  President Trump delivers impromptu remarks an takes questions from the press pool as he departs the White House for a full day of campaigning in Michigan, Wisconsin and Minnesota.  [Video and Transcript Below]

[Transcript] – THE PRESIDENT: Hello, everybody. We’re going to Michigan, Wisconsin, and Minnesota. It’ll be a big day.

I think we had one of our biggest days ever. It wasn’t reported like it should have been, but we had GDP up 31 — 33.1 percent. That was the biggest increase in the history of our country. And I think we’re going to have some other good quarters, very good quarters. And I think next year, if you don’t raise taxes like Biden wants to do — he wants to quadruple your taxes and destroy it — but if you don’t do that, we are going to have the best deal we’ve ever had economically, next year. 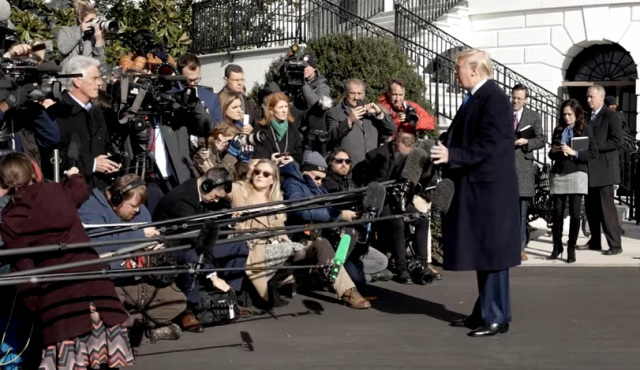 And we’re doing very well with respect to making the turn on the pandemic. We’re working very hard on that. Great therapeutics. You saw various articles today — I guess, even the fake New York Times — you saw an article where people that are seriously ill are getting better. It’s the first time I’ve ever heard them say that.

We have great medicines; I would call them cures, but other people call them therapeutics. But we have some great things coming out, and we have some great things already out. And some are already in use — as you know, fully approved by the FDA. And I think that’s what’s happening, where people are getting better, and they’re getting better much faster. So that’s great.

So it’s been a — it was a great day and a great day yesterday. And now today we’re really celebrating it because nobody thought it was possible. Nobody thought we could ever have that kind of an economic gain. Nobody. Nobody was predicting it. So we’re very happy about that. It really shows that our policies work.

If you had a President with different ideas, instead of having a 33.1 gain, you’d have a disaster on your hands. But we’re set for the best year we’ve ever had.

Q Are you worried about Texas? It looks pretty close there.

Q What about your meeting with Lil Wayne? Why did you meet with him? What did he say to you?

THE PRESIDENT: Well, he wanted a meeting. He’s a really nice guy. He’s really an activist, in a very positive way. And he asked for a meeting, and we had the meeting. And as you saw, the meeting went very well. Lil Wayne.

Q Mr. President, on Election Day, what states are you going to travel to?

THE PRESIDENT: I don’t know. But I may be traveling on Election Day. I may be doing — that’s a very good question. I’ll give you that answer in the next couple of days.

We’ve got the biggest crowds in the history of politics, and I think you will all be witness to that because there’s never been anybody that has ever had bigger crowds or more enthusiasm than we have.

So we have 25,000 people in Minnesota, which is our last stop today. Twenty-five thousand people want to be there. And they say you can only have 250 people. So they’d thought I’d cancel, but I’m not cancelling. And we’ll find out what happens. But we have 25,000 people in Minnesota. And they’re there because they’re angry at the riots and they know that I stopped them, but I stopped them after it was requested and very late. They should have requested it two weeks earlier.

Q Stimulus. Are you — what about — what’s happening there?

There’s never been a President or an administration that’s done more than we have — for our farmers, for our manufacturers, for everybody, in terms of tax cuts; for our military — what we’ve done with the military, in terms of budget: $2.5 trillion. We’ll be completing the wall very shortly. We’re up 400 miles.

So we’ll see you there, okay?