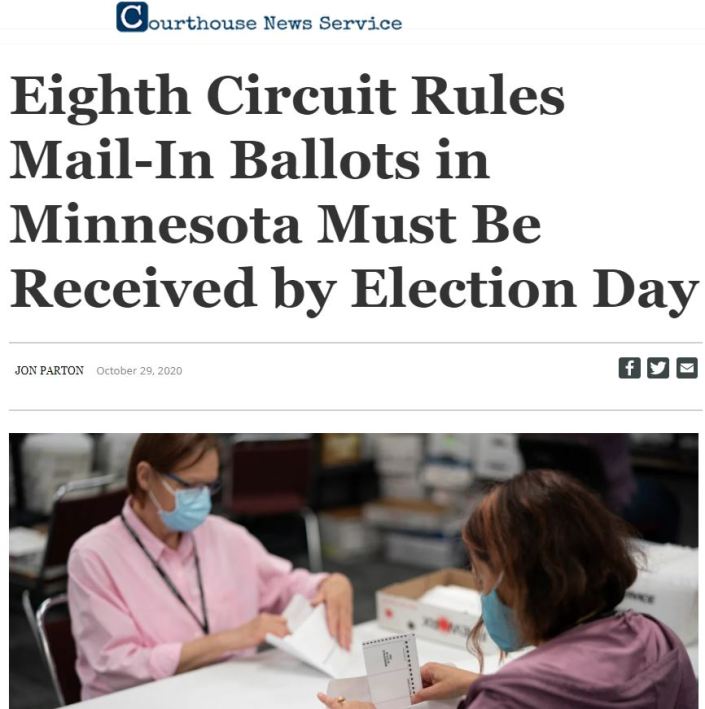 BREAKING: The 8th Circuit appeals court is forcing Minnesota to reject all absentee ballots received after 8 pm on Election Day.

The US Circuit #CourtofAppeals for the #EighthCircuit has ruled that mailed-in ballots in #Minnesota must be received by elections officials no later than #ElectionDay. It’s the latest last-minute judicial #ballot ruling impacting a #battleground state pic.twitter.com/AKmK6KJ99F

Big win for Trump and big win for the Constitution

8th Circuit is forcing Minnesota to reject all absentee ballots received after 8 pm on Election Day.

Per the ruling, the Constitution vests authority over election processes exclusively with a state’s legislature, which means a Governor or other state executive cannot unilaterally change the rules. Instead of being able to count ballots received up to seven days after the election, the decision orders Minnesota to segregate ballots received after 8 pm on Nov 3rd and hold them, separate and uncounted, pending a final legal decision as to whether they can be legally counted.

Special note: From a legal angle, one very significant development is the Court’s clear and explicit language specifying that ONLY state legislatures are Constitutionally vested with authority over elections. This kind of legal reasoning is likely to resonate with conservative SCOTUS justices and may very well be applied to cases involving other states.

In a late Thursday decision, the Eighth Circuit ruled that mailed-in ballots in Minnesota have to be in by Election Day or will go uncounted, striking down state election officials’ plan to accept ballots up to a week after.

The 3-judge panel ruled 2-1 to grant an injunction to the Republican Party’s Electoral College nominees in their challenge to the state’s rule change. U.S. Circuit Judges Bobby Shepherd, a George W. Bush appointee, and L. Steven Grasz, a Donald Trump appointee, wrote that Minnesota Secretary of State Steve Simon overstepped his bounds with the rule change.

“However well-intentioned and appropriate from a policy perspective in the context of a pandemic during a presidential election, it is not the province of a state executive official to re-write the state’s election code, at least as it pertains to selection of presidential electors,” the judges added.

The panel asks a federal court to order state officials to set aside late ballots and be “removed from vote totals in the event a final order is entered.”

In the majority opinion, the judges noted the challenges the state faced in light of the ruling.

“The consequences of this order are not lost on us,” the opinion stated. “With that said, we conclude the challenges that will stem from this ruling are preferable to a postelection scenario where mail-in votes, received after the statutory deadline, are either intermingled with ballots received on time or invalidated without prior warning.”

“We applaud the Eighth Circuit Court of Appeals for upholding the integrity of the election and affirming Election Day as November 3rd. The pandemic has caused upheaval in many areas of life but hiding behind the pandemic to manipulate the election process is not democratic, and we appreciate that our laws and interpretation of those laws matter,” she said in a statement.

The chair of Minnesota’s Democratic Party, Ken Martin, called the ruling “an attack on democracy brought about by a Republican Party desperate to stifle the voices of Minnesotans across our state.”

“This absurd and misguided opinion will toss out the rules that have been in place since before voting began in September,” he said in a statement. “Now, with just five days before election day, and Republicans surely heading for defeat at the polls, the Republican Party is responsible for potentially disenfranchising thousands of Minnesotans who were prepared to vote by mail in the coming days.”

Court says Minnesota late absentee ballots that arrive after Election Day must be separated in case they’re invalidated later by a court.@PeteWilliamsNBC has the details.

From competing rallies to a mail-in ballot cut-off to Kanye West on the ballot, @SullyCNBC details the election drama in Minnesota, a key battleground state this election. https://t.co/LGFnQzmczw pic.twitter.com/0xwe4yP7wk

DO NOT MAIL YOUR BALLOT! Vote early in person or drop off your ballot at your nearest dropoff box.

“I refuse to let the Republican Party tell the people of my state they have lost their right to vote. They can go and vote and they must,” says Democratic Sen. Amy Klobuchar, responding to a ruling that ballots in Minnesota must be received by election day https://t.co/OEpXZw8qKz pic.twitter.com/kqKeAPDIw3

Minnesota – we are five (!!) days away from Election Day! If you haven’t sent your mail-in ballot back yet, drop it off at an official drop-off location like this site in Longfellow to make sure your vote is counted and your voice is heard. Learn more at https://t.co/f39JKUYTte pic.twitter.com/ZECnnlsKrT