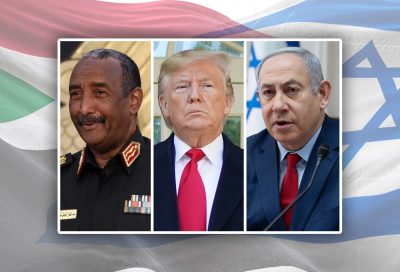 The Sudanese-”Israeli” peace deal isn’t a spontaneous act of reconciliation like it’s misportrayed by some as being but the result of lots of behind-the-scenes maneuvering including last year’s military coup and recent reports that Saudi Arabia will secretly pay Sudan’s agreed-upon $335 million in compensation to US victims of terrorism.

The Road To Recognition

Sudan, which was once ruled by one of the most anti-Zionist governments in the world, announced that it’ll normalize “relations” with “Israel” following the planned signing of a US-brokered peace deal between the two decades-long foes. This wasn’t a spontaneous act of reconciliation like it’s misportrayed by some as being but the result of lots of behind-the-scenes maneuvering over the past few years. It’s important to trace the sequence of events in order to obtain a better understanding of how something as significant as this development came about. It wasn’t by any means an impulsive decision, but one that was at least several years in the making and entirely the result of external meddling into Sudanese affairs.

Former President Bashir was deposed in a military coup last year during large-scale protests reportedly as a result of his armed forces’ refusal to use violent force for dispersing the increasingly riotous unrest. Prior to that “deep state”-driven regime change, the country had gradually aligned itself with the GCC throughout the course of its ongoing War on Yemen, having previously been more closely affiliated with Iran in the years prior. The North African state’s “pariah” status due to its earlier hosting of Osama Bin Laden and support of militant anti-Zionist causes abroad gave it few options other than partnering with the Islamic Republic and China. The War on Yemen, however, was the cynical “opportunity” to change all of that, or so President Bashir thought.

The large-scale dispatch of Sudanese troops and mercenaries to the conflict zone coincided with the country cutting its ties with Iran in January 2016, after which it was for all intents and purposes under the GCC’s near-total influence. The period from that moment until the military coup can be interpreted in hindsight as the time when that not-so-secretly-”Israeli”-backed military bloc extended its sway throughout the country, relying on its newfound leverage over the powerful armed forces. This set the stage for the regime change that would later follow and subsequently transform Sudan into a GCC protectorate for lack of a better description. Its new GCC-allied military leadership then began to seriously consider “normalizing” ties with “Israel” in earnest.

The stumbling block to the country’s removal from international isolation has always been its designation by the US as a so-called “state sponsor of terrorism”. Former President Bashir mistakenly thought that this could be nixed in exchange for contributing so much to the GCC’s War on Yemen, yet that never materialized since the real quid pro quo was recognition of “Israel”, which would have generated even more serious unrest than the anti-government protests that uncontrollably spread throughout the country in spring 2019. For that reason, the former leader refused to take such a fateful step, though it was ultimately his undoing since he might have been able to secure the military’s loyalty in the face of those regime change riots had he done so.

The only way for him to have politically survived that unrest would have been for the military to support his reported decision to use lethal force in quelling them. They didn’t though, not because they sympathized with the protesters, but because they were no longer loyal to the country’s internationally recognized leader due to the massive inroads that the “Israeli”-backed GCC made in flipping this “deep state” institution against him over the preceding years. It wasn’t actually former President Bashir’s decision to make upon thinking about it, but the GCC’s, and they needed him removed in order to advance the “deal of the century”.

It’s unclear whether or not they played a role in inciting the regime change unrest at the time, but they almost certainly ensured that it wouldn’t be quelled by the armed forces that were more loyal to the GCC than to former President Bashir. Upon his removal, the military leadership then sought to recognize “Israel” with the GCC’s support, but Sudan first had to be removed from the US’ “state sponsors of terrorism” list, which is where Saudi Arabia comes in. Although the UAE is arguably the stronger of the two GCC leaders right now, Saudi Arabia still regards itself as the bloc’s “big brother”, which might be why reports have recently circulated that it offered to pay Sudan’s agreed-upon $335 million compensation to US victims of terrorism and their families.

Although it can’t be known for certain, those reports certainly seem credible since Sudan is among the world’s most impoverished nations and couldn’t realistically afford to pay such an enormous sum without some sort of secret support. Iran described the planned payment as a “ransom” to be taken off of the US’ “state sponsors of terrorism” list, which is actually a pretty accurate description even though it seems like it’s Saudi Arabia that’ll end up paying this fee instead of Sudan. Some Sudanese seem to agree with this assessment as evidenced by former Prime Minister Mahdi’s condemnation of it. His criticism is notable since he currently heads the country’s largest political party and presumably reflects popular sentiment in this respect.

Without paying this “ransom” (regardless of whoever ultimately foots the bill), Sudan would never have been taken off the US’ list, which in turn would have created uncomfortable optics for “Israel” if a state regarded by the American government as a “state sponsor of terrorism” officially recognized it. For this reason, it can be surmised that the real quid pro quo was recognition of “Israel” by the post-coup military authorities in exchange for Saudi Arabia secretly paying its agreed-upon compensation, with the end result being the deepening of the “Israeli”-GCC axis’ influence in a geostrategic part of Africa. From an American perspective, this is the ideal outcome since it satisfies all of the US’ interests.

A former leader who had previously partnered with Iran was removed under the pretext of a “patriotic” military “restoring democracy” in accordance with the “people’s will”, which thus provides the cover for it go against the legitimate will of the people by subsequently recognizing “Israel”. The protests that this move might provoke could easily be put down by the “democratic military” with lethal force like they could have done in spring 2019 when confronted with the regime change riots but instead chose not to do out of loyalty to their “Israeli”-backed GCC patrons. Back then without any public decision to recognize “Israel”, it would have been condemned by the West as a crime against humanity, yet now it can be ignored or even justified by them.

The lessons to be learned from this are several. The first is that authoritarian states (the objective description of which shouldn’t be interpreted as expressing any value judgement) are most easily influenced through their “deep states”, particularly their military and intelligence factions. Second, economically desperate states impoverished by years of intense sanctions might try to break their “isolation” by participating in foreign military adventures, which in turn inadvertently leads to their “deep states” being co-opted by their newfound “partners”. Third, this external meddling can be exploited during times of national crisis to encourage regime change which finally leads to the targeted state coming under the full control of a foreign government.

Looking forward, this model could realistically be repeated elsewhere across the world, but that doesn’t mean that it’ll always succeed. Former President Bashir’s biggest mistake was thinking that allying with the “Israeli”-backed GCC would eventually provide an exit from international “isolation”. What he should have instead done was double down on relations with China while staying out of the War on Yemen. Even if he still went through with cutting off ties with Iran as a “goodwill gesture” towards the GCC, he could have still retained enough strategic autonomy through an enhanced partnership with China to remain in office, deliver economic benefits to his people, and enable Sudan to retain its de-facto independence instead of become someone else’s proxy.