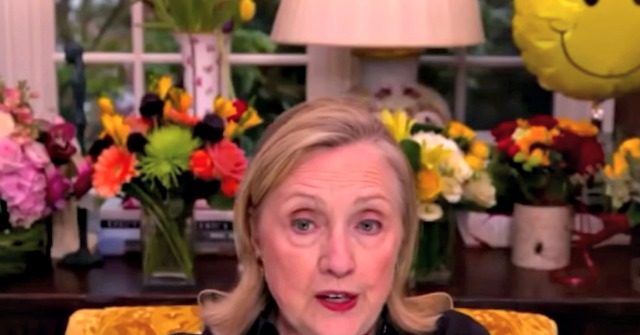 Failed 2016 Democrat presidential nominee Hillary Clinton strategized with the hosts of SiriusXM’s Signal Boost Tuesday on how an incoming Biden administration and a Democrat-led Senate will “rectify” the fact that Amy Coney Barrett has been confirmed to the U.S. Supreme Court.

It’s been a dark week for women … I’m feeling lost … Coney Barrett is seated … we did not have the same level of, at least, vocal, in-the-streets outrage that we had around Kavanaugh.

Are you worried that women are feeling hopeless, and do you think that court reform is … a way that we could actually rectify some of this situation?

I think a lot of women are feeling, um, discouraged. This appointment to the court is as clear a signal, uh, that there’s going to be a concerted effort to turn the clock back on women; on the LGBTQ community; on rights in general; a big shift toward corporate power toward those who are on the right of the political ledger when it comes to guns and climate and everything else we can imagine.

The former secretary of state continued, however, that 61 million people have already voted.

“That’s astonishing,” she said, “and the women I talk to and the shows that I’m doing and the events that I’m part of, you know, there is a determination, so, yeah, it’s … a feeling that, yeah, that this was not good and it’s going to have consequences, but we’re not giving up, we’re going to forge ahead.”

Clinton gave support to Joe Biden’s notion of creating a commission to assess how to reform the Supreme Court, whether to pack it with more justices, or other ideas which, she explained, were too “complicated” to bring up in the middle of a campaign. The former Democrat nominee appeared to think it was wise for Biden not to answer any questions about details of the “consequences” for Barrett’s confirmation to the high Court.

“So, let’s see what happens,” she continued, adding, “You know I’ve told the, uh, the Obama campaign, I mean – the Obama [laughing] – I’ve told the Biden, uh, campaign and the … and the Biden transition that they’re gonna have to move really fast.”

Clinton explained that it matters how many seats in the Senate Democrats end up winning to take back the majority:

And we’re going to have to move really quickly. Now, thankfully, Nancy Pelosi, bless her heart in every way, uh, we can, has teed up a lot of great legislation. It’s been sitting there, dying in, you know, Mitch McConnell’s office. But she’s, she has legislated on everything we care about, even bipartisan legislation. So, I would hope that if we get that Democratic Senate, and I would urge everybody listening to your program, please, please, please, vote for Democrats. If we want to, if we want to get something done again in our country, um, and overcome the really, uh, inexcusable, uh, resistance to progress we’ve seen from the Republicans, uh, then I think we’re gonna have to move quickly.