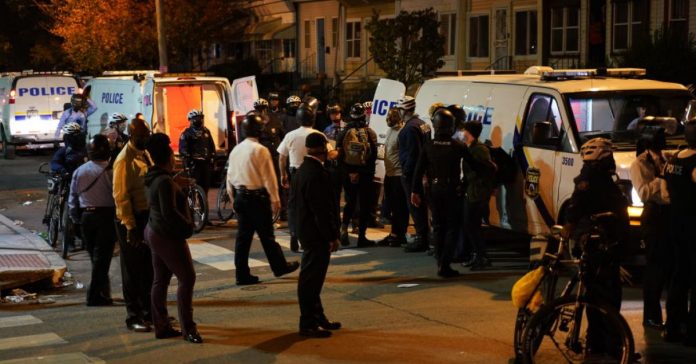 ATF and the bomb squad are currently on scene near Center City Philadelphia where multiple explosive devices were found inside of a van late Wednesday night.

The discovery of the explosive devices comes as violent riots continued in the city over the fatal police shooting of Walter Wallace Jr., 27, who was reportedly shot 14 times as he ran at officers with a knife and ignored commands to stop.

A curfew was established from 9 p.m. to 6 a.m. for Wednesday night into Thursday morning as officials expected a third night of rioting, vandalism, and looting.

Federal investigators on scene were from the Bureau of Alcohol, Tobacco, Firearms, and Explosives (ATF), FOX 29 of Philadelphia reported.

According to the report, the van was parked in Logan Circle (19th Street and Benjamin Franklin Parkway) in the Logan Square area, just west of Center City.

The devices, which were found around 10 p.m. ET, were described as “M-type” explosives, but no other information was immediately available.

It has since been revealed that police and ATF recovered propane tanks, torches and possible dynamite sticks from the van.

During the chaotic night, police were focused on looters who were targeting stores in the city’s Wynnefield section, near St. Joseph’s University.

According to information shared by a reporter from local news outlet WPVI-TV, the front glass doors of a RiteAid pharmacy were smashed, and merchandise was lying on the ground outside. This is just one example of many businesses that were targeted by the rioters.

Earlier Wednesday, both President Trump and Democratic presidential nominee Joe Biden made statements about the “demonstrations” in Philadelphia.

Trump referred to the unrest in the city as “terrible,” and blamed Democratic leadership in the city and the state of Pennsylvania, according to the Philadelphia Inquirer.

“The mayor, or whoever it is, is allowing people to riot and loot and not stop them. It’s also just a horrible thing. I saw the event [the shooting of Wallace]. Everybody did. It was a terrible event. I guess that’s being looked at very strongly. The federal government is looking at it also,” Trump said.

Biden spoke briefly about the issue after voting in Delaware.

“I think to be able to protest is totally legitimate, totally reasonable. But there’s no excuse for the looting,” Biden told the Inquirer.

According to the Philadelphia Police, 81 arrests were made in Tuesday night’s rioting, with 23 police officers suffering injuries.

The Pennsylvania National Guard are expected to be deployed to the city by Friday. Pennsylvania Governor Tom Wolf declared a disaster emergency Wednesday, ensuring that he would be able to request additional support for dealing with the unrest, FOX 29 reported.

Many conservatives believe that the rioting and looting are going to drive out support for President Trump, as they see him as the candidate for law and order.

are leading people in this swing state to vote for @realDonaldTrump pic.twitter.com/NqAFT3VdOB

White House Press Secretary Kayleigh McEnany sent out a statement about the riots:

Our statement on the riots in Philadelphia ⬇️ pic.twitter.com/bfgPJDn9C2