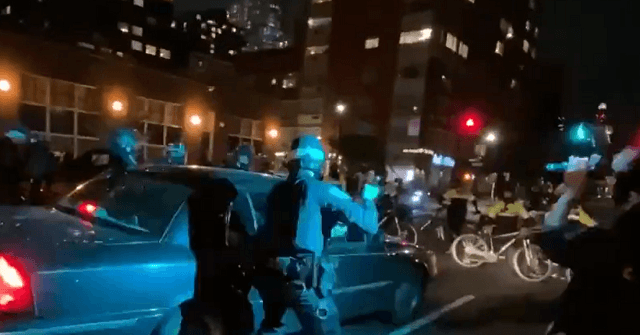 A car with blacked-out windows drove through a line of police officers to avoid being arrested. At least one officer sustained a leg injury during the assault.

New York Post journalist Joe Marino captured the moments leading up to a violent assault on police with a vehicle in Brooklyn, New York, Tuesday night.

The driver of the four door sedan seen here is being sought by police after driving through a phalanx of NYPD SRG cops – injuring at least one officer tonight. The vehicle, which followed a series of mass arrests on Atlantic Avenue, proceeded through the intersection after cops pic.twitter.com/wjRmM2yyB3

New York City police officers attempted to stop the driver of a black sedan near the scene where other arrests of protesters took place.  The driver of the vehicle with blacked-out windows pulls forward and stops before a line of bicycle police officers.

The occupants of the vehicle refuse to get out and police attempt to break the windows.

The driver suddenly accelerates and plows through the line of officers.

Marino reports at least one of the officers sustained a leg injury from the impact.

Multiple protestors are under arrest in Brooklyn Heights as a car just rammed through NYPD cops trying to discourse the crowd pic.twitter.com/LvAAP0o8Dy

NYPD officials did not discuss this incident but tweeted a warning about the large vehicular traffic and emergency workers present in the Brooklyn area Monday night.

ADVISORY: Due to protest activity in downtown Brooklyn, expect vehicular traffic & a large presence of emergency personnel in the area. Consider alternate routes and allow for additional travel time. pic.twitter.com/yB3a1W4MCy