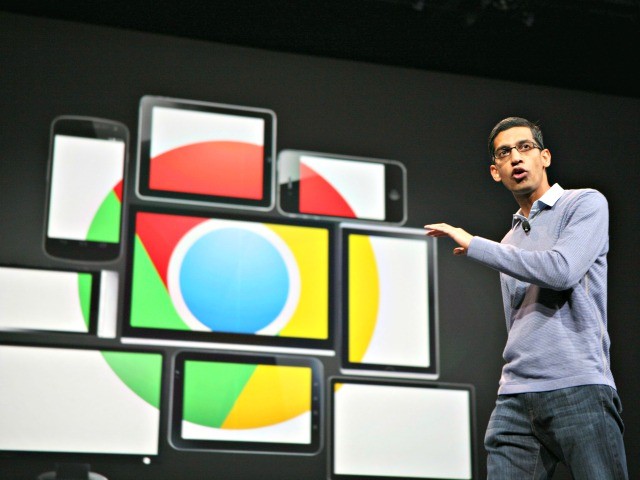 Google, the world’s most powerful technology company, is actively interfering in the coming election by burying links to Breitbart News in its search results.

In July, Breitbart News published data showing that Breitbart’s Google search visibility is down 99 percent compared to the same period in 2016.

RealClearPolitics later published data corroborating this, and showing that the same silent expulsion from Google search results has happened to a variety of other conservative news websites as well.

It appears that Breitbart News links are being hidden on Google searches even when users search for the exact string of words in an original Breitbart headline. When links to Breitbart stories do appear, it is often below obscure websites that plagiarize Breitbart’s content.

Search ranking is critical for web traffic from Google. The search analytics industry has found that the top three search results on Google drive over 70 percent of clicks.

“Breitbart News is, according to Amazon-owned Alexa.com, one of the top five news publishers in the United States, yet if you search — verbatim — Breitbart headlines in Google, you won’t necessarily get any Breitbart results at all,” Marlow said.

The video goes on to demonstrate Google’s suppression of Breitbart News.

In one example, the viral Breitbart News story, “Maskless Nancy Pelosi Goes to San Francisco Hair Salon Despite Coronavirus Restrictions,” fails to return any links to the site on Google.

Instead, Google displays a list of obscure websites, some of which have plagiarized Breitbart’s article, posting the article and headline in full.

Google only displays one link that might lead users to Breitbart’s story, a link to a post about the article on thedonald.win, an independent online forum set up by exiles from r/the_Donald, the Reddit hub of Trump supporters that was blacklisted by the leftist administrators of Reddit earlier this year.

The same experiment was repeated with various other headlines, which again yield links to obscure websites plagiarizing the articles.

In one such case, an article about Candace Owens, a Breitbart link eventually shows up on Google, as the seventh result in a search for the precise wording of the headline.

However, demoting a website to the seventh result in a search for its own headline is still overwhelming suppression. According to the same search analytics cited above, the seventh result on Google drives just four percent of clicks, on average.

The exact headline is: “Exclusive – President Trump: ‘Last Thing I’m Thinking About’ After Coronavirus Is a Phase Two China Deal.“

Breitbart News invites readers to experiment with Google’s suppression of headlines. Some topics are severely censored and others appear as normal. The experiment can be repeated on competing search engines such as duckduckgo.com with dramatically different results.