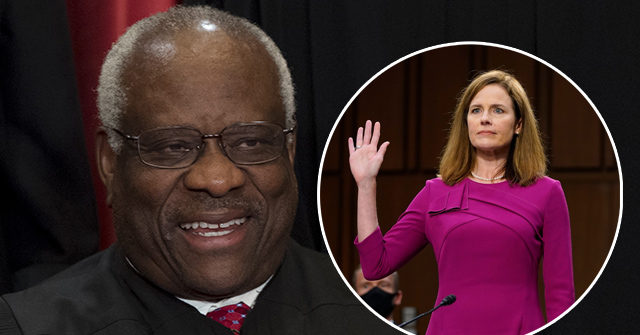 Supreme Court Justice Clarence Thomas will swear in Judge Amy Coney Barrett to the nation’s highest court at the White House Monday evening following her confirmation, according to a report.

The report comes as the full Senate is expected to confirm Barrett at around 7:25 P.M.

“We made an important contribution to the future of this country,” Senate Majority Leader Mitch McConnell (R-KY) said Sunday. “A lot of what we’ve done over the last four years will be undone sooner or later by the next election. They won’t be able to do much about this for a long time to come.”

Barrett needs a simple majority of 51 votes for confirmation. Republican Maine Sen. Susan Collins, who is in a race for re-election, has already said she will vote “no” on Barrett’s confirmation.

If confirmed, Barrett could join the bench as soon as Tuesday and give conservatives a 6-3 majority on the court.