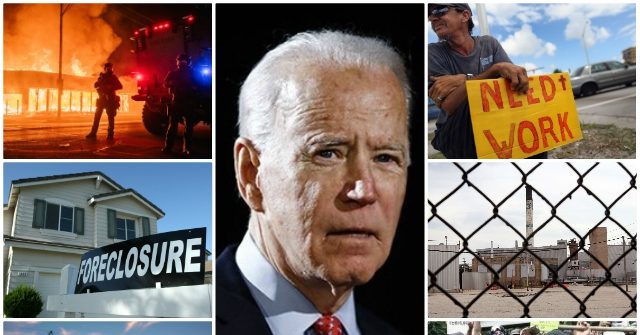 The 2020 election is the most important one America’s suburban families have faced in more than a century. This November, voters will be deciding whether or not to endorse Joe Biden’s radical plans for rezoning our suburbs, raising taxes on our savings, surrendering to China on trade, and flooding our labor market with cheap foreign workers.

Here are six major problems Americans should brace themselves for if Joe Biden is elected.

1. The value of your home will plummet.

Home prices are up this year despite the sudden recession triggered by the stay-at-home orders and the sudden lockdown of our economy this spring. Americans have been snapping up homes at the fastest pace in a decade, eager for the kind of freedom and security they cannot find in city centers these days.

Donald Trump has given a boost to home values by cutting taxes, leaving middle class Americans with more savings for down payment, and repealing intrusive regulation that threatened the suburbs. This summer Trump repealed the Obama-Biden administration policy known as “Affirmatively Furthering Fair Housing,” a rule designed to pressure suburbs into building low income housing and abandoning long-standing limits on housing density.

Biden has said he would not just revive the rule—he would put it in steroids. Leftwing writer Matthew Yglesias—whose recent book calls for America to open its borders to increase our population to one million—has praised Biden’s housing plan as “surprisingly visionary.”

So what’s the plan? It is basically to export the problems of the big cities to Americas suburbs and end single-family zoning. Crowded schools, cheap apartment towers, crime—all coming to your street in the name of “fair housing.” And don’t forget, the left also wants to defund the police.

To Biden and the Democrats, the low-crime and high-quality education available to many suburban families are products of “white supremacy,” redlining, and unfair housing practices—despite the lack of evidence for these claims and decades of federal and state laws making racial discrimination in housing and lending illegal. Never mind fifty-years of liberal housing policy, the fact that some towns or neighborhoods have high priced homes is not a testament to the quality of the community but an indictment of their exclusivity.

“He believes the middle class isn’t a number, but a value set which includes the ability to own your own home and live in a safe community. Housing should be a right, not a privilege,” Biden’s campaign website declares.

2. You will pay for Biden’s repeal of Trump’s tax cuts.

Biden has said he will repeal the 2017 Trump tax cuts that slashed the tax bill for nearly every American family that pays taxes. He says that he will only hike the rates on Americans who earn over $400,000 but every middle class family will pay for Biden’s tax hikes.

Biden’s proposed overhaul of 401(k) plans will hike taxes on the middle class. Under the current law, you get to deduct your contributions to your 401(k) plan right off the top of your income. You don’t pay any tax on the income you contribute or its gains until you start to spend them at retirement. This is one of the reasons 401(k) plans are one of America’s favorite ways to save.

Biden wants to get rid of this tax break. He thinks it is unfair because it rewards people with higher incomes who face higher tax rates. He would replace it with a complicated scheme of tax credits intended to help Americans with lower incomes save more. While the details are complex, the result is not: any married couple earning more than $80,250 would face a higher tax bill.

Biden also wants to hike taxes on corporations. Economists agree that this amounts a tax on shareholders because it lowers the after-tax earnings of businesses. That means lower dividends, fewer buybacks, less investment in growth, and lower stock prices. Over time, this tax hike on businesses will hurt the ability of middle-class Americans to save and invest for their retirement.

3. Your wages will go down as manufacturing continues to be outsourced to China.

Biden now claims he will stand up to China but he has no plan for preserving American jobs in the face of China’s predatory mercantilism. He has criticized Trump’s tariffs, which helped rescue America’s steel and aluminum industries and are forcing China to negotiate with U.S. trade officials, but offered nothing to replace them.

Tough talk will not cut when it comes to China. Action is all that counts. And Biden’s decades in the U.S. Senate and 8 years in the Obama administration have created a long record of doing nothing at all to protect American jobs from China.

Biden does not even see China as competitive threat to American workers.

“China is going to eat our lunch? Come on man,” Biden said at a campaign event in Iowa.

Does he even know how much American manufacturing has been moved to China? David Autor, a Massachusetts Institute of Technology economist who studied the impact of trade with China has described it the “China shock.”

“When import booms from Japan, Mexico and Asian “tiger” economies such as Taiwan arrived in the U.S., many cities and towns were able to adapt,” the Wall Street Journal wrote about Autor’s work. “China was different. Its emergence as a trade powerhouse rattled the American economy more violently than economists and policy makers anticipated at the time or realized for years later. “

But Biden scoffs at the China shock. That reflects his decades in Washington, D.C., where government bureaucrats are not threatened by outsourcing. Far from it—government wages have been climbing while wages of the rest of us stagnate and our factories close down.

4. Your wages will go down as Americans are forced to compete with imported foreign labor.

The United States is one of the most generous countries on earth when it comes to immigration. We have welcomed more immigrants than any other country in the world. Currently, nearly 45 million people living in the U.S. were born in another country—one-fifth of all the migrants in the world.

For some, however, no amount of immigration is enough. The radical Democrats supporting Joe Biden have opposed every effort to control our borders or rethink our immigration policies to suit the needs of our economy. They would flood the country with millions of more immigrants—pushing down the wages of working Americans and stifling innovation as businesses would increasingly rely on cheap labor instead of advancing technology.

“Where Biden pushes regulation in most areas, immigration is not one of them. Biden has proposed relaxing strict immigration policies and instead turning to a model where every type of immigrant, documented or undocumented, could gain access to government resources and a path to citizenship,” according to American Action Forum.

It’s as simple as supply and demand. If American does not limit immigration’s contribution to the labor supply, the price of that labor falls.

5. The crime wave engulfing American cities will spread to the suburbs.

Crime is on the rise once again the the big cities controlled by Democrats. Shootings incidents have doubled in New York City—and murders are up 40 percent compared with last year. Burglaries are up 41.8 percent year to date.

The Democrats plan to lower crime in the cities is to ship it out into the suburbs. The problem is not the lack of policing or releasing criminals without bail—it’s that the cities have too many poor people, according to Biden. So his policy is to social engineer the urban poor out into the suburbs through aggressive use of federal housing policies.

And don’t forget: the Democrats think that Trump’s campaign for “law and order” is racist dog whistling. Their voters are marching in the streets—and increasingly into the suburbs—in protests against the police. Don’t expect them to stop the crime wave from crashing into our neighborhood streets and parks.

6. The Democrats’ Green New Deal will decimate millions of jobs and lead to California-style rolling blackouts.

Biden has endorsed the so-called Green New Deal that would attempt to rapidly eliminate the use of oil and coal in the U.S. power grid. But we’ve already seen where this leads in California: rolling blackouts, expensive power, and a fragile energy infrastructure.

At the last presidential debate, Biden admitted that his program would end fossil fuel extraction in the U.S. He would not do it right way but would “transition” off of fossil fuels.

PRESIDENT DONALD TRUMP: Would you close down the oil industry?

FORMER VICE PRESIDENT JOE BIDEN: I would transition from the oil industry, yes.

BIDEN: It is a big statement.

KRISTEN WELKER: Why would you do that?

That would drive up energy costs. The Green New Deal would also eliminate energy jobs all across America, overturning the fracking revolution in the U.S. that has made us energy independent, created thousands of good paying jobs, and revitalized local economies from Texas to North Dakota, from Arizona to Pennsylvania. Even as far away as Wisconsin, where no oil is pulled from the ground, jobs would be permanently destroyed.

Democratic Party officials and strategists are worried. They know the 2020 election will likely be decided in America’s suburbs. And if the message gets out to voters about what Biden has planned for those suburbs, Biden does not stand a chance.