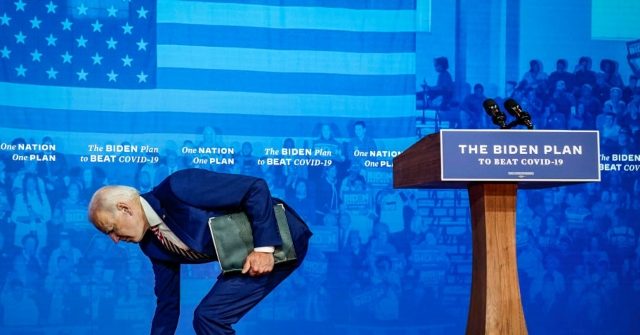 President Donald Trump appeared to have smoked former Vice President Joe Biden out of his basement after he mocked his opponent for having “waved a white flag” while speaking with reporters in Pennsylvania on Monday.

The president spoke briefly to reporters after arriving in Pennsylvania at 10:53 a.m. on Monday morning for three campaign rallies in the state.

“He’s waved a white flag on life,” Trump replied when asked for his reaction to Biden’s accusation that the president had “waved the white flag” on fighting the coronavirus pandemic.

At about an hour after the president’s comments, the Biden campaign broke the “lid” on in-person events to announce a local stop in his hometown of Wilmington, Delaware.

Biden only held three campaign events last week. On Sunday, October 18, Biden held a drive-in rally in North Carolina, and on Saturday he participated in two events in Pennsylvania.

He did not hold any events on Sunday, while President Trump traveled from Florida to North Carolina, to New Hampshire, to Maine, and back to Washington, DC, that day.

“I don’t know, there’s something going on,” Trump said at his rally in New Hampshire. “Somebody said it’s strategy, it’s not, because really, strategy would be coming out.”