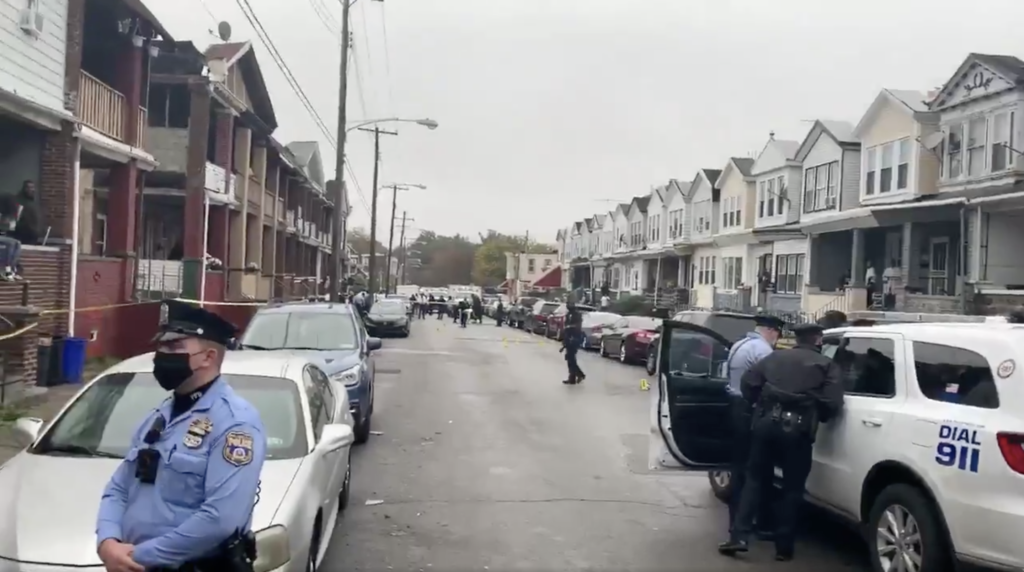 A shooting of an armed black man in West Philadelphia captured on video sparked riots throughout the city leaving at least 30 police officers injured.

Officers have shot and killed a knife-wielding suspect in #Philadelphia, PA after an altercation.

Protesters are allegedly already gathering at the scene. pic.twitter.com/kzbSDAtn19

Police first shot and killed Walter Wallace Jr., 27, on Monday after he advanced toward them while holding a knife despite officer orders to drop the weapon. While Wallace’s mother “tried desperately to stop him,” he still moved towards the officers, prompting them to fire off multiple shots.

“Why didn’t they use a taser?” said his father, Walter Wallace Sr.

“His mother was trying to diffuse the situation,” he said. He said his son struggles with mental health issues and is on medication.

“He has mental issues. Why you have to gun him down?”

It’s unclear how many times Wallace was struck but there were at least 13 markers on the street and a witness said he heard about 10 shots. Cops said both officers fired “several” times

The video shows multiple bystanders crowding the scene to yell at the officers, surrounding Wallace who was taken to the hospital where he was later pronounced dead.

#Philadelphia
Protesters are currently gathering in Malcolm X Park to protest against this officer-involved shooting.

Images shared by the local FOX news station captured the moments just before victim was shot by Philly Police officers.

The shooting is under investigation.

“Fortunately it appears the officers were wearing body cameras,” Philadelphia Police Sgt. Eric Gripp. “The cameras were activated. So we should have a lot of video along with eyewitness statements.”

“Our police officers are being vilified this evening for doing their job and keeping the community safe, after being confronted by a man with a knife,” Philadelphia Fraternal Order of Police Lodge #5 John McNesby said.

“Our police officers are being vilified this evening for doing their job and keeping the community safe, after being confronted by a man with a knife.” @FOPLodge5 President @john_mcnesby @FOX29philly pic.twitter.com/A9ybakQv4Q

Word of the shooting spread quickly and by the time the sun had set, protestors turned to rioters who took to the West Philadelphia, Center City, and North Philly streets to loot, burn, assault police officers, and attempt to prevent the press from covering the ensuing violence.

A group protesting through west philly being followed slowly by cars honking in support and drivers leaning out their windows cheering pic.twitter.com/WeDpiM1nnX

Mass looting has broken out in Philadelphia as Black Lives Matter activists take to the streets to protest the shooting death of a man who charged at police officers with a knife. pic.twitter.com/Aj9IN47Rx8

At least seven prisoners/suspects in custody are waiting a paddy wagon with officers.

ABC trying to kiss ass because the rioters destroyed their van earlier in the night.

According to reports, strip malls, multiple Rite Aids, and other stores and restaurants were vandalized and looted in the chaos, leaving police manpower “depleted,” even when shots rang out.

#Philadelphia
Looters have just ransacked and robbed a T-Mobile store. No business is being untouched, it seems.
pic.twitter.com/PukvJGI6F3

If this is the same place as what police scanner reports are giving out now, this is another Rite Aid.

This Snipes shoe store was hit, still seeing occasional looters in and out. Riot police are staging at multiple locations in West @NBCPhiladelphia pic.twitter.com/kE4vyq23Xn

NEW: within minutes of @PhillyPolice clearing 52nd and Chestnut, dozens of looters are back at the Foot Locker. An hour ago this area was filled with riot police, now just this @NBCPhiladelphia pic.twitter.com/xpv8VMEqp5

#Philadelphia
Current situation:
At least 3 Rite Aid pharmacies, several ATMs, a liquor store, a Citizens Bank, an AutoZone, and several other businesses have been looted tonight in West Philly.

Manpower depleted in the city

Police in riot gear, reportedly requesting to use tear gas, were deployed to the area where they were verbally and physically assaulted by “hundreds of Black Lives Matter rioters” who threw bricks and other objects at officers.

Philadelphia is rioting over the shooting death of a man who charged police officers with a knife.

Black Lives Matter activists are throwing bricks at police officers, at least several of whom have been reportedly injured (per the police scanner). pic.twitter.com/aZfAz6OAUU

#Philadelphia
(Earlier)
Rioters hurled trash cans and other large objects at advancing riot police officers as they attempted to disperse the crowd. pic.twitter.com/v09oZHyOry

Police run away and retreat from a mob of BLM rioters in Philadelphia. pic.twitter.com/mcRONzebDl

During the riot, the mob vandalized at least five police vehicles and one fire department vehicle. At least one police SUV was torched and another vehicle reportedly belonging to a civilian was also set on fire.

BLM looters broke into a police van in Philadelphia. pic.twitter.com/jG8TFsucVB

#Philadelphia
Another vehicle has just been set on fire.

Appears to be a civilian vehicle. pic.twitter.com/8mN57QWFmm

At least 30 police officers were hurt after being struck by projectiles or other objects. One officer was hospitalized after being plowed down by a pickup truck.

Update from PPD — they say 30 officers injured, many from projectiles. And an officer struck by a pickup truck suffered a broken leg pic.twitter.com/BqUNoiTmL2

According to NBC 10, “all the officers, except for the one struck by the truck, had been treated and released as of early Tuesday.”

Officers were forced to retreat as they were attacked by rioters with a barrage of rocks, bricks and other projectiles.

The person filming is cheering them on and laughs as police flee to escape.
Several were injured.
pic.twitter.com/df1943KA2G

Officer down. They just hit a cop with a car. #Philly Philadelphia, PA (clipped from @after_theaction live stream) pic.twitter.com/dy9H0sWxja

Early reports suggest that at least 30 people were arrested in connection to the rioting, looting, burning, and other violence.