On Saturday, the Washington Post published a “perspective” calling on media to label Joe Biden’s scandals “foreign misinformation” even though top U.S. intelligence officials went on record days before to call that claim utterly false.

“We must treat the Hunter Biden leaks as if they were a foreign intelligence operation – even if they probably aren’t,” wrote Johns Hopkins University Professor Thomas Rid.

In the 12 days since the New York Post dropped its first blockbuster story exposing content from a Delaware computer suspected of belonging to Hunter Biden, that’s exactly what the media has done, with the help of Big Tech.

Immediately after the Post published its first in a series of exposés on the Biden laptop showing that Joe Biden had been lying about never discussing business with his son “or with anyone else,” Twitter and Facebook weaponized their monopoly over the digital public square to suppress the reporting. CNN, the Washington Post, and The New York Times, which would typically deploy their full resources to any minor revelation from the Trump White House without scrutiny, took hours to publish anything related to the Hunter Biden emails.

Any time legacy media drops a supposed “bombshell” on Trump, it immediately hits the front pages.

Still waiting on NYT, WaPo, and CNN however to write anything on the @nypost‘s actual bombshell on Joe Biden lying about what he knew of his son’s overseas business interests. pic.twitter.com/amcilH0cv0

ABC, CBS, and NBC gave the bombshell stories less than 15 minutes of coverage between the three networks out of 51 hours of news programming in the days after the news broke.

US media outlets outside of right-wing sites were desperate not to report the Hunter emails and to block their reporters from doing so. So they just started printing that it was “Russian disinformation,” knowing there was no basis for that, until they could figure out what to do.

“A tabloid got a trove of data on Hunter Biden from Rudy Giuliani. Now the FBI is probing a possible disinformation campaign,” headlined USA Today.

“Is the Trump Campaign Colluding with Russia Again?” titled an op-ed by a New York Times columnist.

National Public Radio (NPR) was far more direct, telling readers outright that the taxpayer-funded outlet just wasn’t going to cover the Biden stories because its leftist editors believe it “doesn’t amount to much.”

Why haven’t you seen any stories from NPR about the NY Post’s Hunter Biden story? Read more in this week’s newsletter➡️ https://t.co/CJesPgmGvo pic.twitter.com/jAi7PnpbZf

Here’s a screenshot of what came up when independent journalist Matt Taibbi searched for information regarding Biden and Ukraine. Google results were littered with “fact-checks” from mainstream outlets as opposed to the exhaustive reporting offered to any of the other media-manufactured scandals to plague Trump in the last four years. 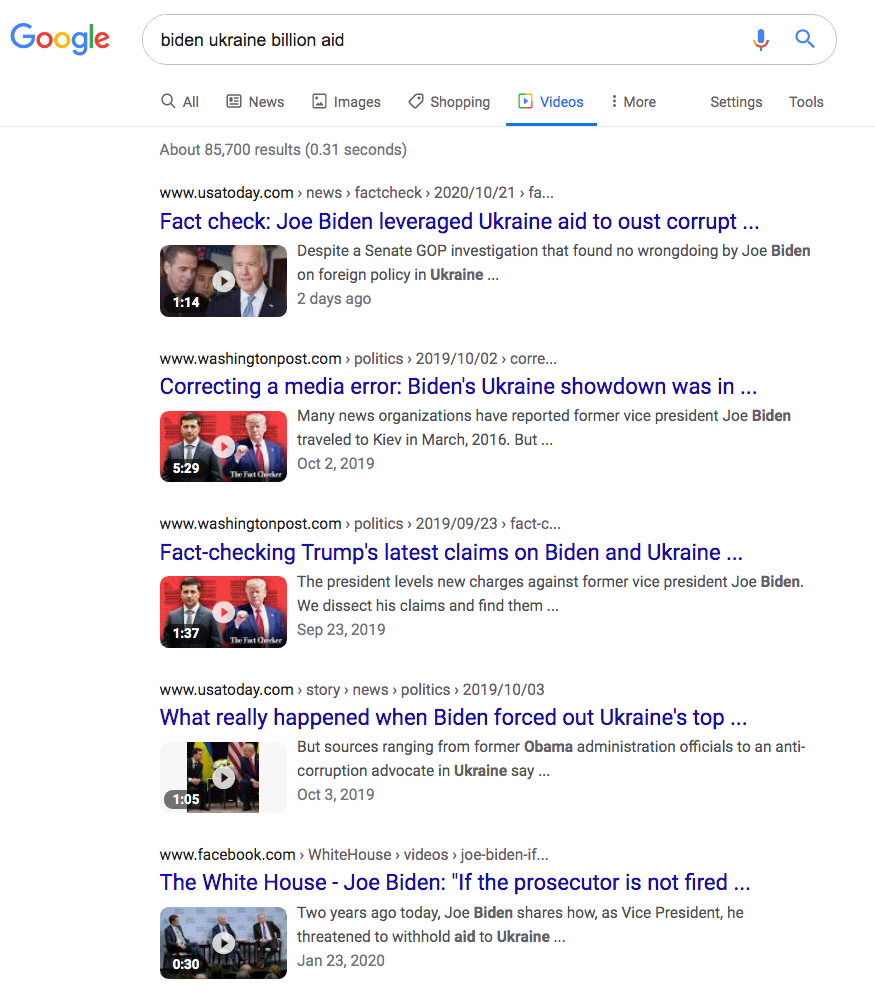 That hasn’t stopped legacy outlets, however, from denying even the potential that the reporting about the recovered Delaware laptop may possess legitimacy. The Biden campaign still has not refuted the authenticity of the content found on the laptop hard drive.

“What can’t be verified?” a justifiably confused Trump responded.

“Are you comfortable with the president of the United States being close to a person like Rudy Giuliani who says also that he is not bothered whether any of the information comes from Russian hacking?” Amanpour asked Republican National Committee spokeswoman Elizabeth Harrington.

“Are you comfortable that CNN used Russian disinformation from a Russian asset to leak it to subvert the peaceful transfer of power?” Harrington shot back. “That reporting on the [Steele] dossier – which was complete verified Russian disinformation – is it not? Is it not? … Everything that Democrats accuse us of doing is what they themselves did.”

Amanpour brushed off Harrington’s criticism, arguing it was the U.S. government making claims that Giuliani, who handed the Delaware computer over to the New York Post, had met with someone suspected of being a foreign asset.

“You know what also the United States government says?” Harrington said. “The FBI says this laptop is not Russian disinformation. So what are you talking about here? This laptop is real.”

“I’m a journalist, and a reporter and I follow the facts. And there has never been any issues in terms of corruption,” Amanpour said of the Biden family.

“How do you know that?” Harrington challenged.

“I’m talking about reporting, and any evidence,” Amanpour said.

When Harrington called on Amanpour and the rest of the media to start doing journalism by engaging in rigorous digging and verification, Amanpour scoffed.