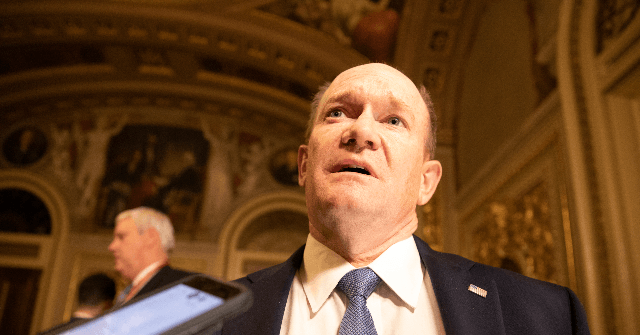 Senator Chris Coons (D-DE) said if Supreme Court nominee Amy Coney Barrett was confirmed, he was open to adding more justices under a President Joe Biden with a Democratic majority in the Senate.

Anchor Jake Tapper said, “If Barrett is confirmed and Democrats win back the Senate would you vote to expand the number of justices on the Supreme Court if it came up for a vote? Is that something you would be in favor of?”

Coons said, “Jake, like Joe Biden, I’m not a fan of expanding the court. We have a few weeks here to see whether there are four Republicans who will step back from this precipice. It is President Trump who has pressed for this nominee so he can have a key vote to overturn the Affordable Care Act in the middle of a pandemic. The Republican majority is responsible for racing forward with this extremely unqualified nominee, unqualified because of her extreme judicial philosophy, and that is who should be bearing the brunt at the ballot box in this election, that they are doing this to get someone on the court just in time a week after the election to take away critical health care protections from a majority of Americans.”

He added, “We need to focus on that, and then if we happen to be in the fact pattern where we have a President Biden, we have to look at what the right steps are to rebalance our federal judiciary.