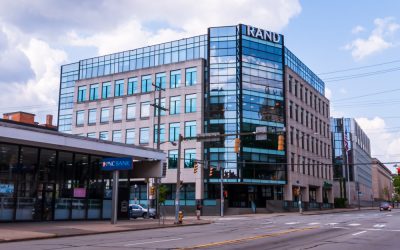 The top 50 think tanks in America, as ranked by the University of Pennsylvania’s Go To Think Tank Index, received over $1 billion from U.S. government and defense contractors. The top recipients of this funding were the RAND Corporation, the Center for a New American Security, and the New America Foundation, according to analysis by the Center for International Policy.

The Top 10 Think Tanks by Amount Received from U.S. Government and Defense Contractors 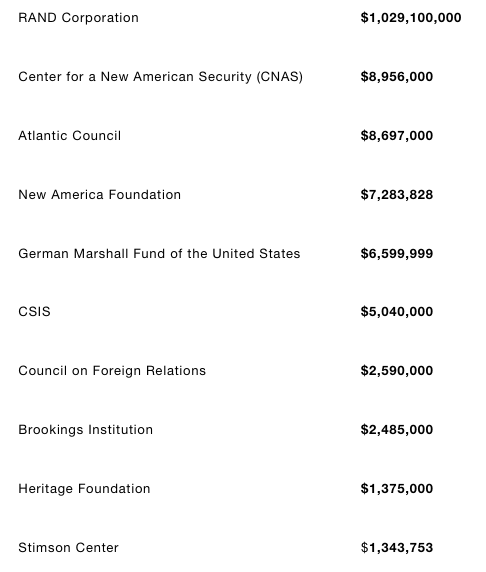 Top think tank funders from within the U.S. government include the Office of the Secretary of Defense, the Air Force, the Army, the Department of Homeland Security, and the State Department. The defense contractors that forked over the most to think tanks were Northrop Grumman, Raytheon, Boeing, Lockheed Martin and Airbus.

The RAND Corporation alone received over $1 billion between 2014-2019, accounting for approximately 95 percent of its funding that the report tracked. Nearly all the money came from the U.S. Department of Homeland Security ($110 million,) the U.S. Army (over $245 million,) and the U.S. Air Force (over ($281 million.)

CNAS, the second highest recipient, received $9 million from U.S. government and defense contractors, including Northrop Grumman, Boeing and the Department of Defense.

The amounts estimated are conservative, due to the fact that most think tanks do not disclose funders or the amount of funding received, or that the amounts are listed in wide ranged (such as $25,000 to $100,000.) Therefore the amounts listed in the report are a floor, not a ceiling, for the amount of money that the top 50 think tanks received from U.S. government and defense contractors. The report also relies on investigative reporting, as well as publicly available information from the think tanks, and their funders.

Solutions Empowerment provides you with information, resources and templates to help you tackle the ever increasing burden of financial debts and liabilities, banking issues, fines, court appointments, driving offences, taxation obligations and other matters including sovereign rights and vaccinations.
Get Your 3 Day Trial Now!