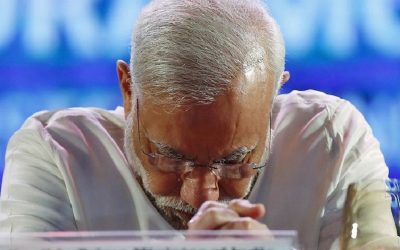 India could have followed the Chinese Defense Ministry’s suggestion to investigate the first-ever firearm discharge near the Line of Actual Control (LAC) in almost half a century, which could have helped New Delhi “save face” before Beijing by de-escalating this extremely dangerous situation that it’s entirely responsible for provoking, but it declined doing so since it’s seemingly more important for Modi to “save face” before his domestic audience even if it leads to a disastrous “war by miscalculation” with China.

The security situation between India and China along the Line of Actual Control (LAC) is rapidly deteriorating after the first-ever firearm discharge in almost half a century occurred earlier this week. According to People’s Liberation Army (PLA) spokesman Zhang Shuili, Indian forces aggressively crossed the frontier and then fired “warning shots” at their Chinese counterparts. In response, he “request[ed] the Indian side to immediately stop dangerous actions, immediately withdraw cross-line personnel, strictly restrain front-line troops, and strictly investigate and punish personnel who fired shots to ensure that similar incidents do not occur again.” New Delhi therefore had a priceless opportunity to “save face” before Beijing by de-escalating this extremely dangerous situation that it’s entirely responsible for provoking as part of the Quad’s coordinated efforts to “contain” China.

Announcing an investigation and holding the personnel responsible who violated the bilateral agreement not to discharge firearms along the LAC could have jumpstarted the long-overdue peace process between the two, but Modi declined doing so since it’s seemingly more important for him to “save face” before his domestic audience even if it leads to a disastrous “war by miscalculation” with China. It doesn’t matter whether Modi lost control of the Indian military if ultra-jingoist frontline forces took the independent initiative to dramatically escalate the situation by firing their “warning shots” or if they received prior approval to do so by the civilian government that’s supposed to be in control of the military. The indisputable outcome is that the most powerful man in India sent the message that he supports their aggressive actions by the very fact that he didn’t condemn them nor initiate an investigation. This is intended to strengthen national unity and place India on a war footing.

Indo-Sino tensions are more serious now than at any point since their brief 1962 war, though Modi’s strategic calculation seems to be that inadvertently stoking speculation about a civilian-military split (whether or not this is truly the case) in the interests of promoting peace with China would be more disadvantageous for the ruling BJP than the possibly uncontrollable conflict that he’s provoking with the People’s Republic. It might even be that he’s convinced that the latter scenario would likely remain a limited and very short war due to both countries’ nuclear capabilities which might act as a deterrent to an all-out campaign against one another. India’s expected loss could even be spun to its benefit by generating immense sympathy for its “brave” role in militarily “containing” China on behalf of its Quad allies, which it could then leverage to attract more investment from them as a “reward”, especially if more of their companies “re-offshore” from China to India in the aftermath.

The most “optimistic” forecast that can be made in light of India’s refusal to take the “face-saving” olive branch that China suggested earlier this week by investigating the so-called “warning shot” incident is that these two countries’ “decoupling” is carried out as peacefully and in as “manageable” of a manner as possible. The author wrote about this in July in his analysis about “What Can Be Learned From The Indo-Sino Disengagement Decision”, though it should now be added that BRICS and the SCO will almost surely become dysfunctional due to their deep distrust of one another in the aftermath of India’s latest LAC provocation. The “best-case” scenario should therefore be expanded to the multilateral dimension by hoping that Russian interests won’t be as adversely affected by this outcome as they otherwise could be, though a lot will depend on whether Moscow successfully “balances” between Beijing and New Delhi or if it continues to tacitly take the latter’s side.

Regardless of the two most likely scenarios — the worst-case one of a limited hot war or the “best-case” one of a “manageable decoupling” — the fact that India lost its last chance to “save face” before China puts the two on an irreversibly negative trajectory that will have far-reaching consequences, as the author explained in more detail in his exclusive article for India’s prestigious FORCE magazine over the summer. There’s no going back after Modi made the fateful decision not to investigate this week’s “warning shot” incident like China graciously gave him the opportunity to do in a last-ditch effort to jumpstart the long-overdue peace process between the two. Asian geopolitics will never be the same after this lost opportunity, nor will the geopolitics of the 21st century more broadly. That being the case, all analysts would do well to base their subsequent forecasts on the assumption that the Indo-Sino rivalry will remain in force for the foreseeable future and possibly even intensify.