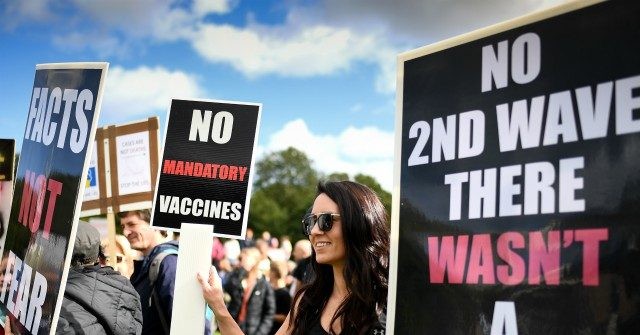 The British government is set to reimpose strict legal limitations on public gatherings, and it is reportedly considering a draconian national curfew.

Prime Minister Boris Johnson will announce today that from Monday, social gatherings of more than six will be banned in England following a rise in confirmed coronavirus cases. Ministers blamed the increase on families interacting and young people having social lives, with the government predicting a ‘second wave’.

“We need to act now to stop the virus spreading. So we are simplifying and strengthening the rules on social contact — making them easier to understand and for the police to enforce,” Prime Minister Johnson is expected to say on Wednesday.

Refusing to abide by the rules will result in a £100 fine, doubling for repeat offences to a maximum of £3,200. Policing forces were already criticised for overreacting to the outbreak earlier this year, including following dog walkers with drones and last month, breaking up a child’s birthday party. Meanwhile, police have struggled to stop illegal raves in multicultural parts of London or ban mass Antifa and Black Lives Matter protests.

In more concerning reports, The Telegraph said that ministers are considering a national curfew. A senior government source told the newspaper that health secretary Matt Hancock had remarked to MPs on Tuesday how in Belgium, a country of just over 11 million, “the case rate has come right down when they put a curfew in place”.

“The coronavirus pandemic is turning sections of the populace into tinpot fascists I call #CovidNazis,” writes @JamesDelingpole https://t.co/8vutimK3Ue

Meanwhile, an astonishing three-quarters of Britons do not think that the public has taken the pandemic seriously (74 per cent) and are worried about a second wave (73 per cent), according to polling by YouGov. The findings from Tuesday suggest that citizens will offer little objection to any such new rules, and will welcome further curtailment of their freedom.

Businessman and peer Lord Alan Sugar hit out at the mainstream media for stirring up fear over coronavirus, as he urged people to return to work.

“We’ve got to get back to some form of normality,” he said on This Morning on Tuesday, giving Britons credit that they know how to wash their hands and observe rules that will mean society can begin to function again.

When challenged by claims that a ‘second wave’ is coming, Lord Sugar said: “I’m sick and tired of watching CNN, Sky [News], Bloomberg, BBC, the lot, because all they do is cause panic amongst people. I’m not interested in any of this stuff, because you can switch the television on any time of day and the first thing you’ll see is more bad news.”

Delingpole: Europe Is Waking Up to the Truth about the Coronavirus Scare https://t.co/Lsq0564hYd