An interesting article in the Miami Herald highlights increased support within the Miami-Dade Latino community for President Trump’s re-election. The article is based around a local poll conducted September 1 through 4, and notes two-thirds of Spanish speaking respondents support President Trump. 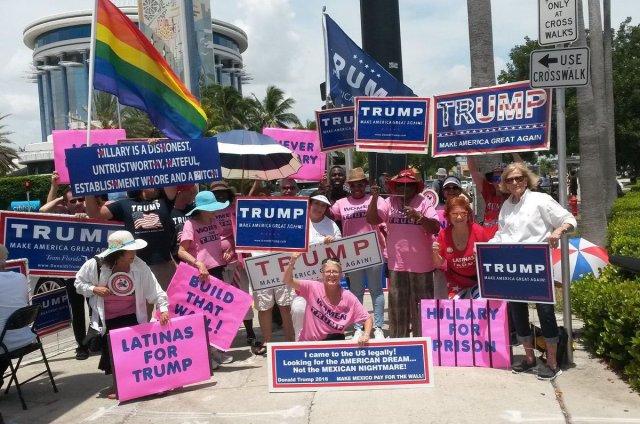 This is an important statistical development within Florida as the current ground reporting indicates President Trump has actually gained significant support since 2016 in the Miami-Dade community.  Democrats need to depend on Joe Biden running-up the vote total in Miami-Dade county because the rest of the state is more favorable to Trump.

Hillary Clinton won Florida Latinos by 27 points; currently Joe Biden is only leading by 16 points. One important factor for Florida is the number of Puerto Rican residents that came into the state after Hurricane Maria, many still remain.  Puerto Ricans skew heavily toward the dependency left outlook; however, the scale of corruption in the aftermath of Maria has revealed the consistent outcome of socialist government.

The Miami Herald article is heavily tilted to favor leftist perspectives and support Biden. However, the underlying information within the article is very good news for President Trump and his supporters.

Miami Herald – […] Trump’s gains among Miami-Dade’s Hispanic voters are due in large part to his success in winning over Cuban-Americans, who in 2016 remained somewhat leery of him following his primary defeat of Miami’s Cuban-American U.S. Sen. Marco Rubio. Since becoming president, Trump has paid several visits to Miami to talk about socialism, including his 2017 trip to Little Havana to sign a presidential memo toughening the federal government’s stance on Cuba’s communist government. He also chose Miami for the launch of his Latinos for Trump campaign coalition, featuring Florida’s Cuban-American Lt. Gov. Jeanette Nuñez as co-chairwoman.

Mercedes Schlapp, a Cuban-American from Miami and senior adviser to the Trump campaign, said she is “not surprised” by the popularity of Trump’s “pro-worker, anti-socialism record.” She referred to Biden’s campaign as an “unmitigated arroz con mango” — a sticky situation — “of leftist policies and alliances” with politicians such as Democratic socialist U.S. Sen. Bernie Sanders.

[…] “There’s still time,” said Amandi. “But the idea that you would want to start with less support than in previous cycles in a county instrumental to the Democrats’ chances of capturing Florida is reason, I think, for concern.” (read more)

Maximo Alvarez is a Cuban immigrant whose family fled totalitarianism from both Cuba and Spain. During the RNC convention Mr. Alvarez spoke directly about candidate Joe Biden and the Democrats’ dangerous slide towards socialism and the far left. Mr. Alvarez knows personally how President Trump is fighting to keep the American dream alive.

A powerful and emotional message directly from the heart:

“There’s nowhere else to go”…