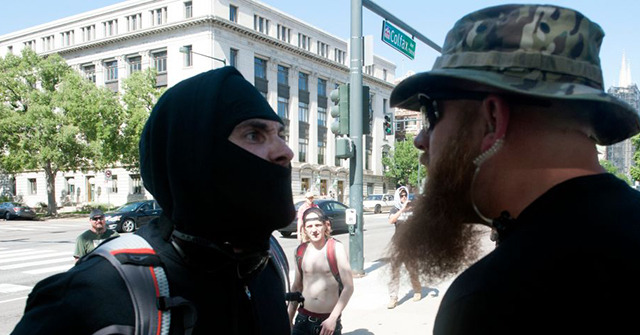 “Biden’s plan is to appease the domestic terrorists. My plan is to arrest them,” Trump said as the crowd cheered.

“Joe Biden and his party spent the entire summer cheering on the rioters rampaging through Democrat-led cities, falsely labeling them as peaceful protesters,” Trump said.

Trump said that the leaders of Democrat-led cities faced a skyrocketing rise in crime as the riots continued.

The president said that America’s liberal elites and the violent leftist elements had joined forces.

“The globalists and the leftists make natural partners because they are united by their contempt for the American middle class,” Trump said. “That’s why powerful corporations and far-left politicians have both sided with radical demonstrators.”

He reminded his supporters that his reelection had been backed by many police organizations around the country.

The president also ridiculed Biden for “talking a little bit tougher” about the rioters and protesters, accusing him of doing it for political reasons after his polling numbers declined.

But Trump predicted that Biden would never use the phrase “law and order” on the campaign trail.

“He’ll never get to say that. Can’t say that, because then he’d lose the whole left,” Trump said. “And let me tell you, the left is running that party. You don’t want to be dealing with the left. These people are stone cold crazy.”

Trump referred to videos on social media of “screaming far left maniacs shouting wildly at peaceful Americans” during the ongoing protests and riots throughout the Summer.

“These are Biden supporters, and if he wins, they will be in charge of your government, as sure as you’re sitting there,” he said.